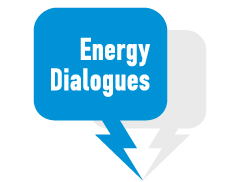 The restructuring of Greece’s electricity market, its target model, upcoming NOME-type auctions to intensify competition, and the role of renewable energy sources (RES) were discussed by speakers at today’s inaugural “Energy Dialogues” event in Athens, co-organized by energypress and the Hellenic Energy Regulation Institute (HERI).

Participants at the inaugural edition of the event, whose aim is to enrich and deepen domestic public discussion on current matters concerning and influencing all aspects of the Greek energy market, offered strong positions, while all agreed that there was no time to be wasted.

Regulatory Authority for Energy (RAE) Deputy President Miltos Aslanoglou noted that the country’s target model needs to fit into the wider European framework. Commenting on RES production, Aslanoglou underlined that European regulations already made clear that greater penetration was needed. The RAE deputy said the upcoming introduction of NOME-type auctions is a measure whose objective is to provide the time needed by other mechanisms to begin operating and develop competition in the energy market.

Electricity Market Operator (LAGIE) President Anastasios Garis, noted that the prospective Energy Exchange would offer new potential to the electricity market. “We will provide the market with the opportunity to buy and sell electricity in a flexible way. Players, themselves, will be able to handle risk management through various products,” Garis stressed.

Hellenic Association of Independent Power Producers (HAIPP) – ESAI locally – General Manager Giorgos Stamtsis told the “Energy Dialogues” event that direct access into Greece’s electricity market was not yet possible by independent third parties. In other comments, Stamtsis contended that a greater demand for production flexibility will emerge in the years to come as a result of the market penetration of RES production.

Pantelis Kapros, Professor at the National Technical University, NTUA, Greece’s oldest and most prestigious educational institution in the field of technology, warned that regulatory initiatives taken by the government and RAE did not stand a chance of producing substantial results as “we continue to have just one buyer of electricity without competition.” The professor did say that plans for the part-privatization of PPC, the Public Power Corporation, and NOME-type auctions were headed in the right direction with regard to increased competition, but he maintained a cautious outlook.

Antonis Kontoleon, board member at EVIKEN, the Industrial Energy Consumers Association, told the event that Greek industry was trapped amid monopolies controlled by PPC and DEPA, the Public Gas Corporation. Kontoleon added that the association was demanding a consistent industrial policy from the government for matters concerning energy cost. He predicted that PPC’s part-privatization, locally dubbed “Little PPC”, was doomed to fail, meaning that the electricity market’s “monopoly will continue to exist in the foreseeable future.”

Kontoleon said the implementation of NOME-type auctions was a one-way street, noting they need to be fully enforced, not selectively.

The government understands the problems faced by Greek industry, but revisions were difficult because of the prevailing monopolies, the EVIKEN representative remarked.

Konstantinos Athanasiadis, a member of the newly established Hellenic Association of Energy Trading and Supply Companies (ESEPIE), contended that the extent to which RES producers will participate on equal terms in the electricity market, and what this meant for the market’s prospects, remained questionable.

“Energy Dialogues”, a thematic series whose inaugural event, today, focused on the restructuring of the Greek electricity market, will continue with future editions.