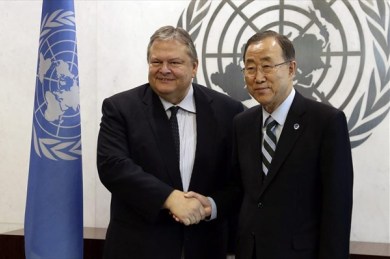 Foreign Minister Evangelos Venizelos has denied that Athens has been tipped of by American authorities about jihadis being trained in Greece or leaving the country to fight abroad.

“No we have had no such specific notification,” said Venizelos after being questioned about reports that the CIA told Athens seven people of Greek origin were fighting abroad as jihadists. “We are in very close cooperation with the American administration and with all of our allied countries.”

“Greece is participating in the international mobilization against the so-called Islamic State,” said Venizelos after a meeting with UN Secretary General Ban-Ki Moon in New York on Sunday. “So we are participating in the international cooperation on exchange of information in order to protect our countries, because this is now an issue of internal security. Greece does not have an immediate problem, but we are very interested in our neighbouring countries and the wider region.”

Venizelos said that the talks between the two men also focussed on reunification negotiations in Cyprus.

“We believe that the appointment of the Secretary General’s new Special Adviser, Mr [Espen Barthe] Eide, is a very good choice and can help things along, but we want a solution that is within the framework of the UN Security Council resolutions; a solution that is viable, just; a solution that is in accordance with the European acquis; and, primarily, a solution that can be accepted by the Cypriot people, the two communities, via a referendum,” said Venizelos.

The two men also discussed the ongoing UN-mediated talks between Greece and the Former Yugoslav Republic of Macedonia (FYROM).

“We are prepared to participate in the next meetings,” said Venizelos.” We support this process, but we have taken major steps, creative steps. Our stance is very clear. Our national stance is in favor of a compound name with a geographical qualifier, for use in relation to everyone, domestically and abroad, erga omnes.

“So we are waiting for the other side to take corresponding steps that are in good faith and productive.”