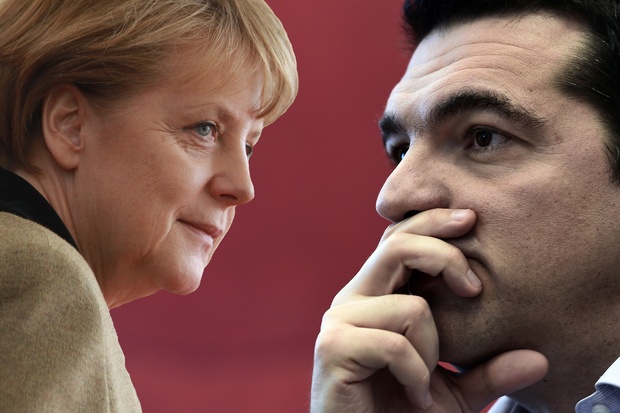 Greek Prime Minister Alexis Tsipras is meeting German Chancellor Angela Merkel in Berlin on Monday in the highest-level effort to date to bridge the gaping political differences between debt-ridden Greece and its eurozone partners.

Mr. Tsipras is expected to seek financial concessions for his cash-strapped country from Germany, the largest contributor to Greece΄s bailouts. However Ms. Merkel, under pressure from parliamentarians and the public, is likely to press Athens to implement tough economic reforms in exchange for funding, as mandated by its recently extended bailout program.

Ahead of the meeting, Ms. Merkel΄s spokesman poured cold water on hopes of a swift solution to Greece΄s financing woes, saying the bilateral meeting is neither the time nor the format for “finding solutions to Greece΄s problems.”

“Greece has an agreement with the Eurogroup and not with Germany,” Steffen Seibert told reporters on Monday, adding “no bilateral meeting can and should replace what happens on problem-fixing within the Eurogroup, this is not a competing event today.”

Ms. Merkel will receive Mr. Tsipras with military honors in the late afternoon. The leaders will brief the press after bilateral talks, and afterward attend a working dinner.

Carsten Schneider, a lawmaker from the center-left Social Democrats, said he expects the meeting to serve as a “signal of de-escalation” after weeks of intense rhetoric between the two governments over topics ranging from fiscal austerity to Greek demands for reparations for Nazi-era crimes.

German politicians have stressed for weeks that it΄s up to Greece, not Germany, to spell out concrete measures to overhaul its economy, as demanded by its international creditors.

“I want to finally know whether Greece is ready for real reforms or not, ” Mr. Oppermann said.

Polls indicate the German public΄s patience toward keeping Greece in the eurozone is wearing thin. Increasingly negative public opinion could hamper any future vote in the German parliament on a third bailout for Greece.

A YouGov survey published last week found 59% of Germans now favor Greece leaving the eurozone, up from 48% a month earlier. A mid-March poll by Forschungsgruppe Wahlen for broadcaster ZDF found 80% of Germans say Greece isn΄t acting reliably with its eurozone partners, while 52% want Greece out of the currency union altogether.

“Clearly the cost of Tsipras and [Finance Minister Yanis] Varoufakis” policies is that the bar for an agreement has been put higher, I have never seen such strong doubts in the German parliament on voting for a third package for Greece,” said Henrik Enderlein, professor of political economy at Berlin΄s Hertie School of Governance.

Another source of rancor in the debate is the Greek governments repeated demands for reparation for Nazi atrocities committed during World War II.

The German government has stuck to its line is that the topic of wartime reparations was closed decades ago, but some senior lawmakers from the Social Democrats and Greens say the issue merits further attention, given the scale of Nazi wrongdoing, but separately from the current bailout debate.

In an interview with Monday΄s edition of the Süddeutsche Zeitung, Greek Foreign Minister Nikos Kotzias said Athens seeks political as well as legal agreement on reparations and proposed setting up a commission of experts from both countries “to find a common denominator.”