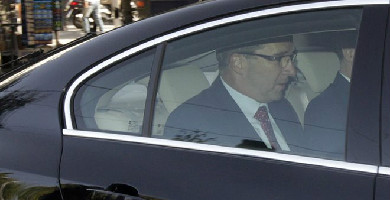 Following a first day of talks between Greece’s new finance minister Gikas Hardouvelis and troika envoys on Thursday, the foreign inspectors were to meet on Friday with several other ministers for briefings on the progress of a series of economic reforms pledged by Athens in return for continued rescue loans.

The first meeting of the day began at 10 a.m. and was at the office of Labor Minister Yiannis Vroutsis where issues of labor market and pension reform were expected to dominate the agenda. The envoys were scheduled to meet subsequently with Health Minister Makis Voridis and Development Minister Nikos Dendias for updates on their sectors.

Representatives of the European Commission and the European Central Bank were to be joined on Friday by the envoy from the International Monetary Fund, Poul Thomsen, who had been held up in Ukraine. The troika mission chiefs are scheduled to leave Athens next Thursday.

According to sources, troika officials expressed dissatisfaction during Thursday’s initial talks with Hardouvelis over repeated pledges by Greek government officials for tax breaks and the possible renegotiation of levies imposed as part of the country’s two loan programs such as the special solidarity tax.

On the other hand, the inspectors were said to be satisfied with overall progress in implementing a second set of six prior actions, particularly the approval of the partial sell-off of the Public Power Corporation in Parliament earlier this week. They were also impressed that Greece managed to sell three-year bonds on Thursday despite adverse market conditions, sources said.