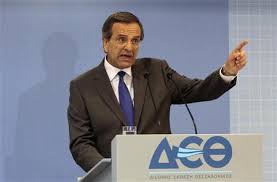 The special consumption tax (EFK) imposed on heating fuel would soon be reduced by 30 percent, Prime Minister Antonis Samaras announced over the weekend, during his speech at the opening of this year’s Thessaloniki International Trade Fair.

“This tax did not produce the desired results, while also causing significant environmental damage,” Samaras acknowledged.

The tax on heating fuel was increased a couple of years ago to the level imposed on transportation fuel, but the move backfired as a drastic reduction in consumption led to a sharp fall in tax revenues. Also, the measure prompted environmental damage as numerous cash-strapped households in densely populated urban areas turned to alternative heating solutions that, in many cases, were toxic.

The Greek Prime Minister also told the trade fair, traditionally used as a platform by political heads to announce policies for the coming year, taxpayer demands from a newly introduced single property tax, ENFIA, which replaces the so-called FAP tax and a levy paid through electricity bills, would be lowered. Tax discounts would be offered in cases where property was disconnected from the electricity grid or not generating rental income, Samaras pledged. Mistakes had been made with the new ENFIA tax, “but we’re fixing them,” Samaras conceded.

The new property tax would soon develop into a vital source for tax revenue, Samaras noted, while adding that it would be used to finance local governments.

The prime minister also said medium and high-voltage energy prices in industry would be set at the same level, the objective being to bolster local competitiveness.

During his speech, the Greek prime minister spoke of Greece’s prospective energy role in the wider region and the country’s subsequently elevated geopolitical position. Greece, in a few years from now, would develop into a major energy exporter, to European markets in need, Samaras noted.

“Up until a few years ago, nobody dared to speak of our energy wealth. Now, increasingly significant energy reserves are emerging in Greece. The first [round of] mining contracts have already been signed,” Samaras stressed. “You can understand how important all this is for creating new jobs, as well as for the upgrading of our nation’s geopolitical and geostrategic role.”