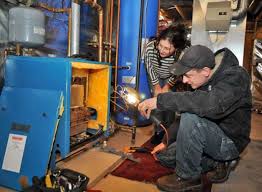 Consumer interest for new heating gas connections skyrocketed by 330 percent in the wider Athens area and 250 percent in Thessaloniki over the one-week period following the minister’s announcement, based on the number of telephone enquiries made and visits paid to EPA – gas supply company – branches by interested parties. Highlighting the level of consumer interest, this heightened activity precedes the subsidized program’s official launch. Besides Athens and Thessaloniki, the robust household interest has also generated a considerable response in Thessalia, located in the mid-northeast.

Based on the minister’s announcement, properties owned by interested parties – houses or flats in apartment blocks – must be located in areas valued no more than 2,500 euros per square meter, according to tax office evaluations, and on roads covered by the natural gas distribution network. No other conditions, such as income criteria, have been announced. The subsidy program is expected to cover as much as 60 percent of the total conversion cost for each household. Applications will be processed on a first-come, first-served basis, until the available funds have been absorbed, according to Maniatis.