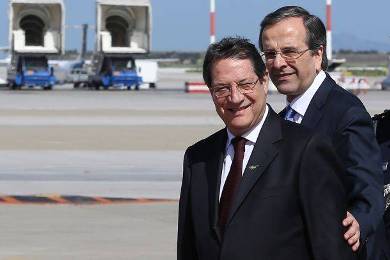 The principle of a common view shared by Greece and Cyprus and of both countries coordinating their efforts “remains unchanged as a stable pillar and under any condition,” Greek Prime Minister Antonis Samaras said on Thursday in Nicosia, where he will be on an official visit until Friday evening.

According to AMNA, addressing a dinner given in his honour by Cyprus Republic President Nicos Anastasiades, Samaras expressed support for the island republic president΄s decision to suspend his participation in talks on the Cyprus issue. We support his decision to abstain in bicommunal talks until the conditions are right, Samaras noted.

Turkey has chosen a policy that “bears no relation to international law,” he said, adding that Greece was observing the situation with caution. He also expressed the hope that the Turkish side works towards creating the circumstances for a restart in the talks.

In his response, Anastasiades said that the time Turkey chose a policy of intensifying tension is not accidental; it has chosen to undermine stability and peace that “Cyprus, Greece and other countries are working to build in this combustible area,” referring to the greater Middle East. Cyprus is being called on to deal with this challenge and defend its sovereign rights, and he is not willing to accept any pressure, threats or blackmail to return to the talks in order to achieve a solution based on military might, he asserted.

On Friday morning, Samaras will have a separate meeting with the Cypriot president followed by meetings attended by delegations of the two countries. Afterward, Samaras and Anastasiades will meet with the leaders of the parliamentary parties.

At noon, Samaras will visit the House of Representatives and address a plenary session.

Before his departure from Cyprus, the prime minister will meet with Archbishop of Cyprus Chryssostomos II.