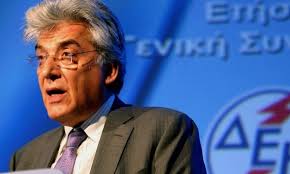 The resignation of former PPC (Public Power Corporation) chairman and chief executive officer Arthuros Zervos was accepted yesterday by Production Reconstruction, Environment and Energy Minister Panayiotis Lafazanis on behalf of the Greek government amid a fury of rumors as to who would succeed the official at the power utility’s top post.

A number of electricity market authorities, as well as officials linked to the coalition government’s Syriza party have been reported as candidates for the job.

Zervos resigned on Wednesday following a wave of outrage stirred by his decision to sign a new three-year collective agreement several days ago with PPC’s union of employees, leading to indirect pay rises, as well as a move, just hours before his resignation, by Council of Appeals Court Judges in Athens to send Zervos to trial in connection with excessive pay rises granted to 19 senior PPC officials between 2010 and 2012, breaking bail-out agreement conditions.

In an announcement released yesterday by the former PPC head, Zervos denied having violated bail-out terms imposed by the country’s creditors and, instead, noted that a misunderstanding had been caused by his interpretation of unclear terms, especially ones concerning family allowances.