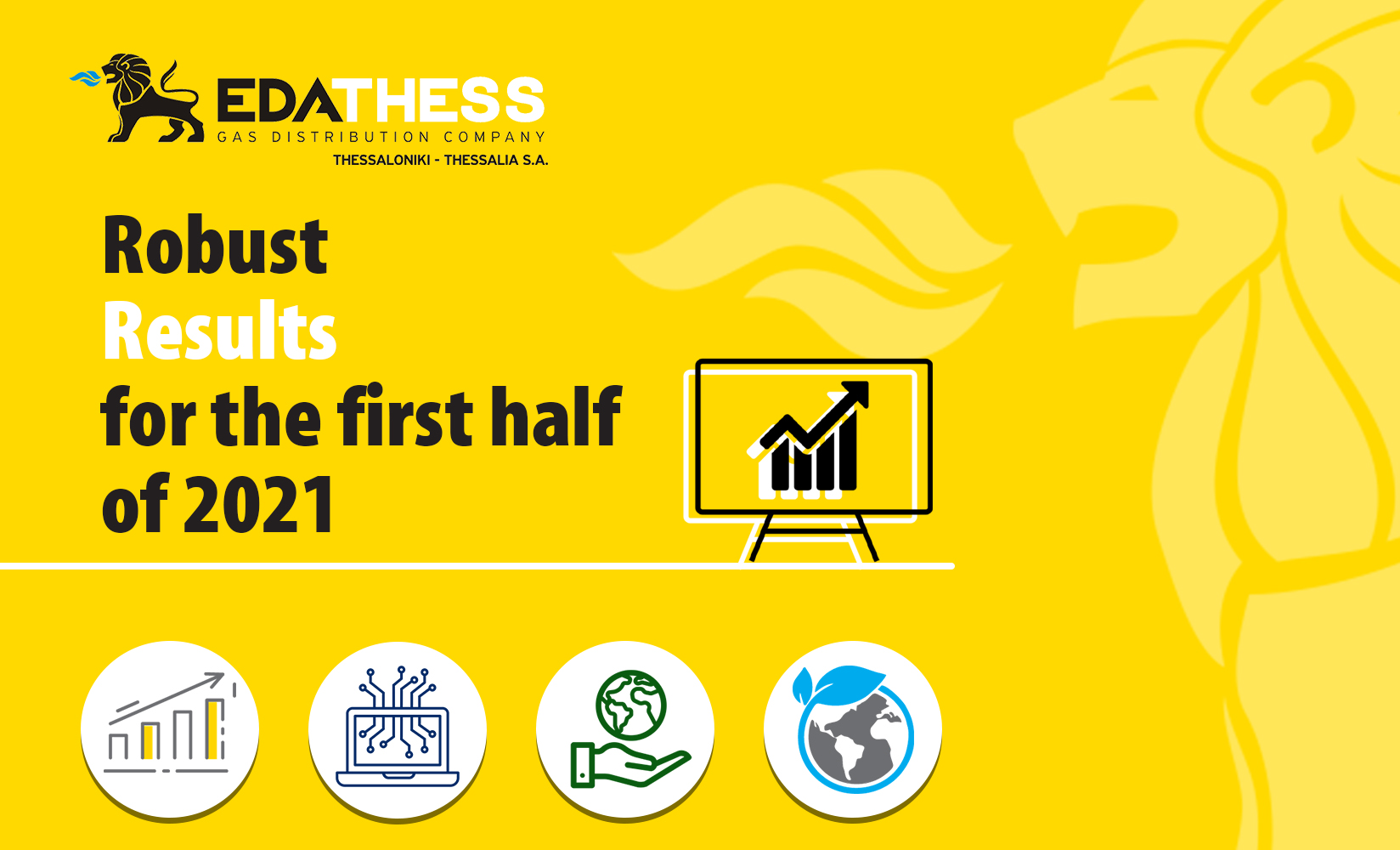 The Board of Directors of EDA THESS approved the results of the first half of 2021.

In particular, natural gas penetration continued in the first half of 2021, exceeding 64% of the population in the Licensed areas, as a dynamic growth of the market was recorded with the signing of 9,970 new connection contracts, increased by 20.2% compared to the corresponding period of 2020. The increase in the natural gas distributed volumes was significant, as it amounted to 313.2 million Nm3, increased by 12.7% compared to the first half of 2020, driven by the expansion of the consumer base and the connection of large consumers and energy-intensive industries.

The Company’s rapid growth rates are the result of its targeted development planning based on the continuous optimization of the provided services to end consumers and distribution users as well as the rapid decline of the network usage tariffs, which for 2021 reached 21% in domestic use and 56% in industrial offering multiple economic advantages to consumers. Equally important were the environmental benefits from the use of natural gas in the areas of the License, as only for the first half of 2021 more than 365.5 thousand tons of carbon dioxide and more than 2.1 thousand tons of sulfur dioxide were saved. The increasing penetration of natural gas in a transitional period for the national economy, energy and the environment, plays a decisive role in the effort for the recovery and achievement of the State’s environmental objectives.

The Company continues the implementation of its investment planning, respecting the legal, regulatory framework and the decisions of the Authority, with consistent and thorough implementation of an integrated strategy based on the efficient management of the available resources. During the first semester of the year, EDA THESS observed the approved Development Program, constructing high standard networks, based on safety and technical integrity. At the same time, the Company achieved the streamlining of costs, always in accordance with the approved expenses by RAE without burdening the distribution tariff for the end consumers. The operational preparedness of EDA THESS, which guarantees the safe and uninterrupted operation of the distribution network has also been maintained at a high level.

The investments of the first semester of the year were implemented according to the annual planning, exceeding € 14.5 million, increased by 15.7% compared to the corresponding period of the previous year, while by the end of the year, the full implementation of the investment program is expected. The Company continues to invest in the development of modern natural gas infrastructure and innovative technologies, while supporting the ongoing process towards its digital transformation. A process inextricably linked to the energy transition, as in addition to increasing efficiency, the digitization – automation of operations and the flexibility of gas infrastructure and network will enable the future integration of renewable gases. Thus, the crucial role of distribution networks is emerging, paving the way for the decarbonization of the final energy mix while contributing to the achievement of national and European Energy and Climate Sustainability goals.

The strong performance of EDA THESS is also reflected in its financial results, as the Company’s total revenue amounted to € 36.8 million, exceeding the budget by 7.9% while earnings before interest, taxes, depreciation and amortization (EBITDA) for the first half of the year reached € 26.6 million, showing an increase of 14.3% compared to the budget. Finally, the Company’s earnings after taxes amounted to € 13.8 million, increased by 21.9% in comparison with the budget levels.

Concluding the Meeting, the convening of the Ordinary General Assembly Meeting for the approval of distribution of dividends for the fiscal year 2020 to the shareholders was scheduled.