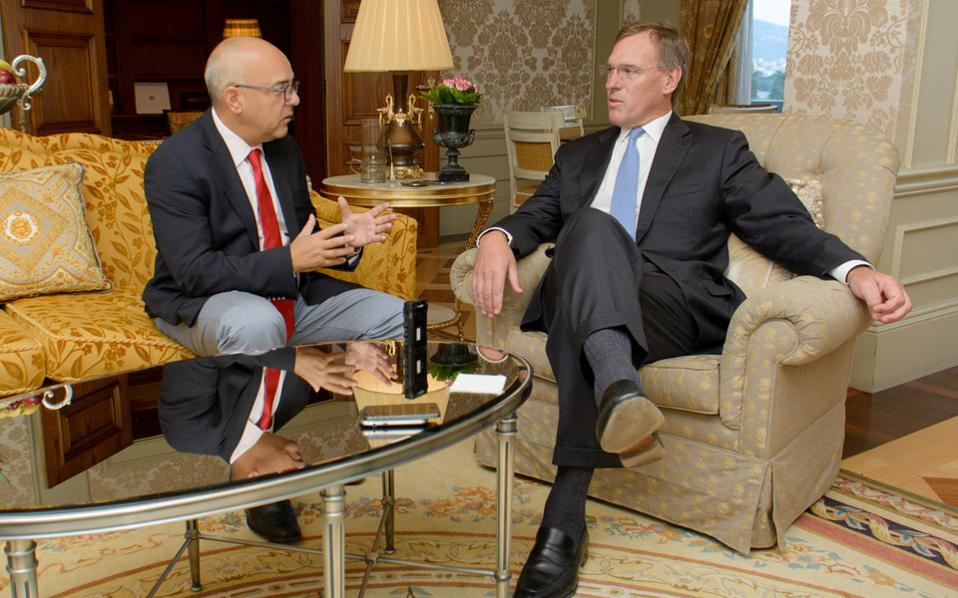 “I think the markets will support you,” says Richard Gnodde, co-chief executive officer of Goldman Sachs International and co-head of the Investment Banking Division in this interview with Kathimerini on Sunday during a recent visit to Athens.

However, he adds, Greece will have to make sure it runs primary surpluses on the fiscal account and maintains its balance of payments position. “I think the position is stable, but one is going to have to work hard to keep it stable,” he says.

We often hear that “the Greek debt crisis is over.” Should we bet on that?

The position in Greece has stabilized. What is most important is that the competitive position of the country improves, and the employment profile and outlook, particularly for the younger generation, improves. To the extent that the country can continue to run surpluses both on the primary account, but also balance of payment surpluses and, hence, the direction of the travel on the debt side is an improving one, the country will continue to stand on stable and secure ground. So, yes, I think the position is stable, but one is going to have to work hard to keep it stable.

Is the debt issue not as important as it was for the last three years or so during the crisis?

I think the markets will support you. If you are running primary surpluses on the fiscal account, the balance of payments position continues to be the way it is, the markets will continue to support you. I must say I admire the work that has been done here in Greece and I recognize some of the pain that is involved. But there is more work to do. The absolute quantum of debt, the size of the unemployment is going to have to continue to be worked through. And that is going to require continued focus on competitiveness, continued focus on structural reform, because the unemployment issue has to get dealt with over time.

Is the debt to GDP ratio that important?

What is the main difference between Portugal, Ireland and Greece?

Each country got into the crisis in slightly different ways, for slightly different causes. So, it’s very hard to compare; it’s a little bit like comparing apples and oranges. I don’t really want to make comparisons. But, what I will say is that all three countries have taken significant steps to address their issues. And all three countries are on a much stronger footing today, which is obviously good for all of Europe and, frankly, all of the world. So, I think they’ve all taken their own medicine and they all need to continue to work hard though.

So, Ireland, Portugal and – maybe – Greece. Is this the right path to emerge from the austerity programs and reach the markets?

In which direction should we look for a good investment?

I think the economy that is showing the greatest strength right now is the United States. It’s a great year, had good performance last year, and obviously it continues on that performance. And so we remain bullish and optimistic about the US economy. It’s obviously the largest economy in the world and the growth rates that it is set to achieve [represent] very significant growth in the global context.

What are the strengths of the US economy?

It’s obviously come out of a long recession and the competitiveness of the country has changed meaningfully: the whole energy structure, the shale gas revolution. The US has changed the energy dynamic very significantly. That’s enabling manufacturing to be more competitive and it’s had a significant impact in terms of the balance of payments, given the fact that they are producing more of their energy domestically. And then broadly, the real estate sector has obviously recovered. I’d say broadly across the economy there is a recovery.

And what about Europe?

Europe is in a much better position than it was 12 months ago. Some of the tail risks have been significantly reduced. Now it’s very hard to find someone who doesn’t think that Europe is going to hold together. Europe has gone from a position of significant concern, significant risk in the financial system, from “Will the currency hold together?” to a position of stability. Although Europe is not growing, it’s not shrinking. Europe is on much firmer ground, but I would not say that we’re totally out of the woods. An enormous amount of very good work has been done.

Will European Central Bank President Mario Draghi pull it through?

Draghi can’t solve all the issues in Europe. Draghi can lead the ECB in a very good way, which is what he is doing. The steps that he’s taken in terms of interest rate policy, the discussions he is having around injecting liquidity and helping to stimulate the economy are absolutely the right things to do and we would support those.

Why are structural reforms so important?

Governments across Europe need to play their role, too. We need structural reform; ultimately it comes down to competitiveness. “How does Europe compete against the rest of the world?” And, until you reach a position of competitiveness, it’s hard to really achieve significant growth. And there are a number of issues there: energy policy; energy costs in Europe are significantly higher than in the US.

That’s a big advantage for the US.

A big advantage relative to Europe. People talk all the time about labor market practices and obviously there are issues there. And so those structural reforms are very, very important in terms of driving long-term, sustainable growth. The US and Europe are at different stages in the cycle. The US is coming out of a process of quantitative easing, very easy monetary policy, and the debate in the US is now “When do we start raising interest rates?” “When do we complete the withdrawal of the Fed from the system?”

So you think that this time it will be different.

I think the environment is presenting a very stark choice to the people of Europe.

No, I think Europe now has a very clear choice. You maintain the current position and we’re going to be in a very low growth period for a long period of time, with high unemployment and all the consequences of that position; or we go through a period of reform, increasing competitiveness which will drive job creation, deal with the unemployment issue and put us in a different path. And, ultimately, I think Europe will go on that second route.