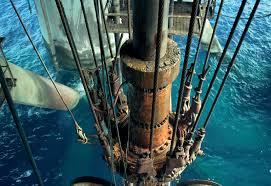 Greece’s hydrocarbon exploration prospects have suffered a setback following a decision reached yesterday at an OPEC conference in Vienna for the 12-nation cartel to maintain production at current levels of 30 million barrels per day, despite an oversupply in the market, which promises to keep oil prices suppressed.

Based on this news, sector companies, without exception, from major to small, can all be expected to reassess their investment plans. Reacting to the OPEC announcement, the price of crude oil plunged to 68 dollars a barrel, a four-year low.

At such levels, the level of investment for exploration work, especially in deep-sea areas such as the Ionian Sea, western Greece, as well as south of Crete is highly likely to be affected. Both areas, whose waters are largely uncharted, are the focus of an international tender.

Both the Brent Crude and WTI benchmark prices fell by three dollars a barrel in just two hours on yesterday’s news. According to one sector theory, the level invested in oil exploration drops by one percent for every dollar lost in benchmark prices.

OPEC Secretary General Abdalla Salem el-Badri announced that the cartels daily production level of 30 million barrels per day will be maintained until June, 2015 before undergoing reassessment.

The deadline for bidders in Greece’s international tender concerning twenty sea offshore blocks in the Ionian Sea and south of Crete expires one month earlier, in May. Subsequently, prospective investors will need to base their investment plans and  decision-making on high-cost exploration work amid a market of low oil prices and uncertainty as to what may follow.

“It’s not the best you can hope for when you’ve launched an ambitious tender,” a local sector authority remarked.

This latest development is expected to have a greater affect on Greece’s offshore oil prospects, as the cost of deep-water exploration is far greater compared to onshore drilling work. The number and type of companies to participate in the Greek tender can be expected to be influenced by this OPEC decision.

Besides the lower oil prices, prospective investors are sure to take into account the troubling global conditions and Greece’s political uncertainty. Current President Karolos Papoulias’s five-year term expires next March. Failure by Greek Parliament’s political parties to support a new candidate with 180 votes in the 300-seat house, which seems highly probable, will prompt early elections. The main opposition leftist Syriza party, well ahead in various polls, says it will radically change current policies.