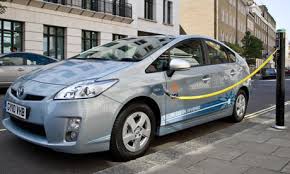 Besides PPC, the Public Power Corporation, a number of other companies, such as the privately run electricity suppliers Elpedison and Terna, as well as various local municipalities, including those of Athens, Thessaloniki, Lamia, Larisa, and Katerini, are all believed to be examining the prospects of Greece’s nascent electric car market.

This was made clear at a PPC event staged in Athens this week, as part of the European Union’s “Green eMotion” promotional program for electric vehicles.

Besides a number of recharging stations being developed by PPC, a further eleven, all installed by Fortisis, are already operating. Seven of these stations have been installed at parking chain Polis Park stations, while the other four are located at the “Eleftherios Venizelos” Athens International Airport’s Metropolitan Expo Center. An additional fifteen to twenty recharging stations are believed to be on the way.

The head official at the Hellenic Institute of Electric Vehicles, HELIEV, or ELINHO, locally, Giorgos Ageridis, who estimated that between 25 and 30 electric cars are currently being used in Greece, said they were being driven by public utilities, municipalities, agencies, and private owners. For the time being, most of these models are charged at home garages. The number of electric cars is expected to gradually snowball as promotion of the new concept broadens and intensifies and more recharging stations begin operating. Legislation was approved earlier this year to permit the installation of recharging stations at petrol stations, car repair shops, as well as roadworthy certificate stations (KTEO). The number of recharging stations is expected to proliferate once the Ministry of Environment, Energy & Climate Change makes clear the prerequisites for recharging station permits. This may occur by the end of this month.

Ageridis, the HELIEV chief, told energypress that Greece’s Ministry of Infrastructure, Transport and Networks still needed to inform the Finance Ministry of the type of vehicles it intended to officially brand as being electric. Three sub-categories have been established abroad – battery operated cars, hybrid models charged via power sockets, and models equipped with thermal engines that charge batteries.

The lofty retail prices of electric cars stand as another obstacle for this new market’s development. At present, prices range between 22,000 euros and 58,000 euros.

The Green eMotion program aims to develop a roaming-type system, through which electric car owners will be able to recharge at any stations, including abroad, using prepaid cards to cover their transactions.

“A driver with a PPC deal, for example, who is traveling in Italy would be able to recharge at an Italian recharging station with the same prepaid card [used at home],” noted Valy Lioliou, PPC’s head official for the Green eMotion program.

Greece is not the only European country whose electric car market remains at a nascent stage. Major European auto industries have invested heavily in fuel-powered engines in recent years. Progress in the emergence of electric cars has even been slow in Germany, a traditional powerhouse in Europe’s car industry. Just a few hundred recharging stations operate in Germany, while the overall figure for Europe is estimated to exceed 2,500.