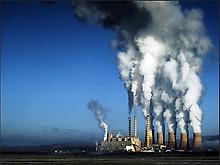 A joint ministerial decision aimed at offering support to energy-intensive industries faced by greater carbon leakage risk as a result of the indirect costs of emissions resulting from the implementation of the EU’s emissions trading scheme (ETS) has been signed by Greece’s Environment, Energy & Climate Change Minister Yiannis Maniatis.

According to the ministry, the decision is expected to be co-signed by the Development & Competitiveness and Finance Ministers within the next few days.

The measure, whose cost has been estimated at between 15 and 20 million euro, is expected to run through at least 2020.

“Compensation for the indirect cost of CO2 emissions stands as a basic pillar in European energy and climate change policy, in order to protect European and Greek industry against international competition,” Maniatis noted. “This is a measure that has come to stay for many years, as its extension beyond 2020 is considered a given.”

Meanwhile, amid ongoing negotiations for European positions on energy and climate change policies, Greece’s Energy Ministry, represented by Konstantinos Mathioudakis, Secretary General for Energy and Climate Change, is seeking greater protection for the EU’s more vulnerable member states, as determined by GDP per capita, compared to the EU average.