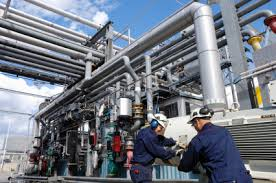 Industrial representatives fear the political uncertainty that is overwhelming all economic activity in Greece at present could lead to unfavorable changes in electricity rates for the sector.

The deputy minister noted that industrial electricity rates agreed to for the current year at a meeting last January will remain valid until terms for 2015 are implemented.

At this stage, it is considered almost certain that the PPC shareholders meeting planned for December 22 will be postponed.

The European Commission wants a series of pending issues concerning price-shaping mechanisms in the energy sector, such as NOME-type auctions, a “disruption” management plan – to enable energy cost savings for major-scale industry in exchange for a reduction in energy consumption whenever required by the system operator – and new CATs, to be finalized before a decision is reached on any renewal of the current favorable industrial consumption rates. The ministry insists the industrial sector has nothing to fear.

Industrialists fear that early national elections and victory for the main opposition leftist Syriza party, currently ahead in various polls, could lead to unfavorable terms for industry.