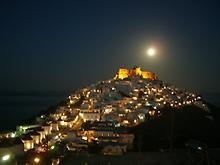 The cost of a kilowatt hour on Greek islands can cost as much as 1.75 euro, while the cost of an equivalent electricity unit on small islands with limited populations usually  ranges between half and one euro, records show.

This elevated cost is passed on to all electricity consumers through the Common Benefit Services charge, or YKO, which enables islanders to enjoy power use at the same rates paid by consumers linked to mainland grids, despite the higher cost of supplying electricity to the islands.

However, the extent to which consumers must pay the price for high-cost electricity production on islands enjoying closer and more regular contact with the mainland, primarily as a result of larger populations, greater trade and strong tourism industries, such as the Cyclades and Crete, is another matter. Such islands ought to have been connected to the mainland’s power infrastructure long ago, which would have spared them from their reliance on petrol-fueled power stations and the environmental pollution these cause. Also, consumers in other parts of the country would be spared of the enormous amounts they are forced to cover for electricity supply to the islands.