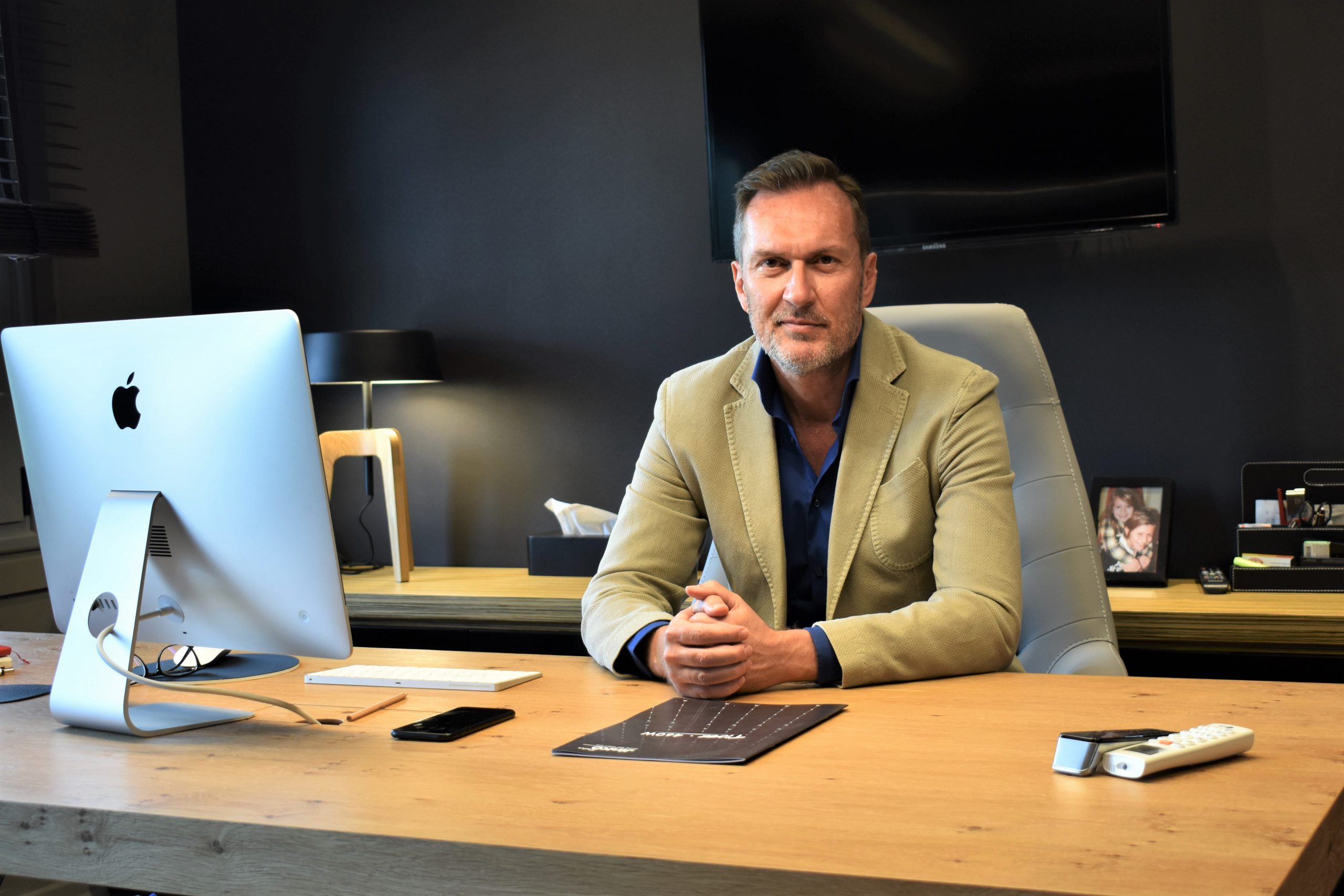 Compared to a traditional module, what is unique about Jinko’s Tiger PRO module?

Jinko Tiger Pro series combines some of the most advanced technologies currently available in mass-production to increase module power up to 585Wp480Wp module efficiency above 21.4% based on monocrystalline PERC cells and available in both mono and bifacial versions.

Tiling Ribbon technology eliminates the inter-cell gap and increases the efficiency, together with the half-cut cell design which reduces cell current mismatch and ribbon power losses.

In addition to that, the MBB technology shrinks the distance between the main busbar and the finger grid line which decreases the resistance loss and increases both power output and efficiency especially in low irradiance environment.

The module uses a tiling ribbon solution. What is the difference between that and a shingled module and paving technology?

Shingling is very advanced technology and very similar to TR for the cell overlapping concept. The key difference is that everything is based on the metal glue for the overlap and therefore it’s not really reliable if you don’t have a special structure of the cells, which however makes them not cost-effective. However, Shingling is not the mainstream production process so the cells could be too fragile. You risk the disconnection of the cells. Metal wire is still the most reliable with the standard, mono-PERC high efficiency.

Paving doesn’t really increase the density compared to TR or shingling because cells do not overlap hence that increases complexity in the cell interconnection and there can be shunts or possible damages of the cells.

Tiling ultimately is a light overlap of cells to increase power density which gives the highest possible packing factor for cells into a module, without changing dramatically the module production methods and basis technology. This is the advantage of the Tiger Pro series, using a consolidated, established technology with an add on technology, tiling and multi-busbar, which increase module efficiency and Wp.

Is the tiling ribbon solution a proven technology? For example, what about its performance in process stability, material reliability and yield?

The mature and reliable mono PERC  HC technology, which was successfully used in Cheetah & Swan series, is used also for Tiger and Tiger Pro series to significantly increase the module power, and to increase module reliability, by mitigating  for instance the hot spot effect significantly compared to the previous full-cell technology.

Materials used for the production are standard module materials and Tiger Pro module is manufactured almost as a normal Half Cell module, except the welding process and TR technology, which flattens the ribbon to ensure reliability at the cell overlapping area.

Are there any changes in size for the Tiger PRO module? For example, what is the wafer size?

The modules are larger than our previous series because we use larger cells for production, we can’t disclose precise details at the moment but we believe it is the most advantageous  solution for both module performance and compatibility for the optimal PV system integration and profitability.

Tiger Pro module was designed with the support of inverter manufacturers such as Huawei, Sungrow, SMA, Fimer and SolarEdge. Solar trackers providers such as Soltec, Arctech Solar, Nextracker, and Array Technologies also provided input to assure compatibility of their products with Tiger Pro modules and the best possible overall cost structure.

What are the advantages in system cost and LCOE for the Tiger PRO module?How do you calculate cost reduction?

PV projects yield and profitability significantly increase thanks to the reduced LCOE and increased IRR achieved with the higher module efficiency and power density of Tiger Pro modules. In fact the improved low irradiance performance of Tiger series enables an average of 1.57% higher energy generation compared with 5BB module and thanks to the TR technologies. Moreover Tiger Pro series in particular, thanks to its higher efficiency compared to similar power class products available in the market  allows to reduce  by around 2% the BOS cost, saving 1.4% land cost,  1.3% EPC cost, 9% string number, 2% clamps/structure costs therefore reducing further the overall LCOE.

There is also a broad range of adaptive inverters and mounting solutions that enable Tiger Pro panel to realize its full potential to the best; we are able in this way to reduce the LCOE at a very competitive level, making solar power plants much more competitive than in the past. We also reduced the logistics cost for modules transport, which represents about 5% to 7% of its total cost.

What are, besides the use of solar energy, additional benefits for the environment and society of the Tiger PRO module?

The Tiger module has reached 450 (kg eq CO2/kWc) and is currently going through the CFT Certification process; we expect comparable results for the Tiger Pro series.

The high module efficiency allows to use less amount of mounting structure, combiner box and cable, leading to low BOS cost which helps to decrease the LCOE and improve the IRR of PV project, promoting the grid parity in different countries.

Higher efficiency and power density of Tiger effectively enables to optimize the usage of space to generate more clean energy; it can also save up to 8.2% transportation resource, which decrease carbon emission significantly. Finally, the round shaped MBB reflects the light to cell reducing light pollution and glare effect.

What about the ramped production of the Tiger PRO module and its efficiency? What’s your capacity forecast for next year?

As the production processes are roughly the same, we can virtually convert almost all production capacity to Tiger, however it does take some time to convert the stringer machines from 5 BB to MBB.

We are anyway planning at least half annual module production, so roughly 9-10 GW, for Tiger only planning to begin mass-production of the new series in the fourth quarter of this year, but will begin accepting the first orders already from now.

What are Jinko’s target markets for this module?

We developed these products based on our long experience in big power plants out of the necessity to combine the increasing customer demand for higher efficiency and class power modules for both utility scale plants and C&I rooftop installation applications.

Tiger Pro is the upgrade from current mainstream production Cheetah version, allowing also to produce both monofacial and bifacial modules, thus making it suitable for either utility and C&I projects, also compatible with the cutting-edge transparent backsheet technology based on Dupont’s Clear Tedlar film to endow backsheet with excellent corrosion resistance, anti-UV capability and resistance to water vapor permeation. Because of the intrinsic features of the Tedlar, the transparent backsheet is also easier to clean requiring less maintenance.

What about the market response to this new product up till now?

Tiger PRO is still in launch phase so it is too early to assess the market response with precise figures, however the interest from our customers in our current Tiger series is already pretty high and we have already filled the order book with almost 2GW shipments worldwide already, so we expect that our new Tiger Pro version with foster even more the success of this innovative technology taking more market share going ahead thanks to its additional benefits for our customers PV project investments.

Jinko is currently the largest company in the PV industry in terms of module shipments. Could you talk a little about your product development strategy?

All Jinko products are always developed out of the necessity to combine the increasing customer demand for solutions that can effectively increase the IRR and profitability of their PV project investments with the most advanced technology innovations compatible with the current industrial production processes to supply higher performance and class power modules for each specific segment, either large utility scale projects, commercial and industrial installations, rooftop and residential applications.

This is the advantage also of the new Tiger Pro series, which is an upgrade our current mainstream Cheetah product using a mature and reliable technology, with more advanced add-on technology like Tiling-Ribbons and multi-wire, to improve the power density and module performance thus addressing the needs of the market for higher efficiency and higher Wp modules for both commercial and industrial rooftop installation applications.