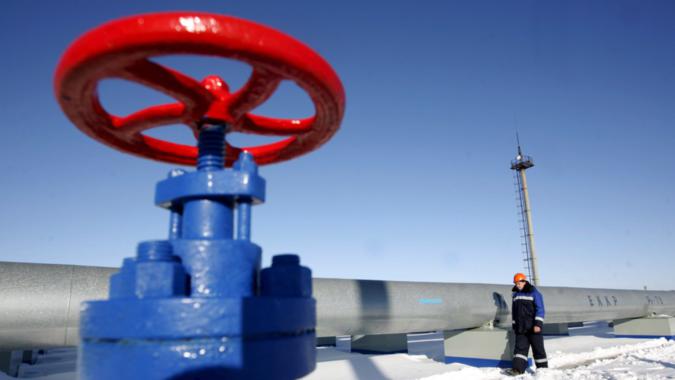 Not everybody attending the Iranian natural gas summit last week in Frankfurt was there for the same reason.

While most were gauging the prospects for an opening of major natural gas reserves and liquefied natural gas (LNG) export prospects, others were there for quite different reasons.

Take the three representatives from Russia’s gas giant Gazprom (OGZPY), for example. They weren’t there to scout new investment packages. On the contrary… They were there to see just how badly their company’s position was under siege.

And it’s no wonder the Gazprom guys looked concerned. From what I saw at the summit, they have every reason to be.

For energy investors, on the other hand, the news is very good…

Gazprom is in Dire Straits

Gazprom may still be the largest natural gas company on the face of the Earth, exporting more gas than anybody else and providing revenues that account for the biggest single chunk of the Russian central budget… But it is facing down some difficult times.

For one, extractions are declining at the primary mature fields the company has depended on for decades. To offset that growing problem, Gazprom needs to move into three very expensive new regions – above the Arctic Circle, onto the continental shelf, and into eastern Siberia.

Moscow is hard pressed to provide the necessary funds for that.

Then, there is the need that Gazprom continue to expand aggregate exports. Merely to keep pace with past year totals is not enough.

New pipelines to China and Europe were touted as solutions to this issue. Yet both projects have been plagued with political, pricing, and contract problems. In the case of the South Stream project – intended to move Russian volume into southeastern Europe – astronomical costs, blockading politics from transit countries, and a rising EU move to diversify energy sourcing, have combined to scuttle the venture.

Additionally, Gazprom has relied on a contract mechanism that is falling under its own pressure…

The Gas Giant’s Pricing Structure Does it No Favors

A typical agreement from the Russian behemoth includes three components. First, it’s a very long-term deal. Usually such contracts will extend for 20 years. Second, there is a “take or pay” provision. This requires that the end user accept a minimum amount of gas (usually 70 percent of a monthly allotment) or pay as if they had – regardless of actual demand.

Third, there’s the pricing formula itself. It’s determined by using a basket of crude oil and oil product prices and adjusted periodically (monthly in some cases, still quarterly in others). It’s here that Gazprom has suffered its most appreciable shortfall. As the price of crude oil collapsed starting in November 2014 until the recent OPEC production agreements, Gazprom’s pricing formula made sure its export proceeds went south as well.

Several European contract parties have also brought (or threatened to bring) arbitration actions to reduce either prices or volume drawn (or both). Several of these have obliged Gazprom to provide “temporary” contact alterations.

Of course, these changes simply become precedents for others to demand the same.

The dive in oil prices has created major revenue problems for Gazprom. The more recent move up in crude has done little to offset the problem. The company continues to spend more than it is bringing in.

Now, it certainly does benefit from “off the books” subsidies from the government. But with the entire Russian central budget dependent on oil and gas export revenues, under the table transfers are hardly a workable solution.

So the last thing Gazprom needs is rising competition in the markets it already services.

And that brings us back to Frankfurt…

LNG is the Future of the Natural Gas Market

Gazprom representatives to the Iran LNG & Gas Summit in Frankfurt were there to assess their Iranian competition. True, the company had been involved in a development project for one of the more than 20 phases in Iran’s huge offshore South Pars basin.

But the three Gazprom guys at Frankfurt were not there to scout new investment packages. This was all about the company’s existing markets already under siege.

There was talk about an ongoing discussion to move Iranian gas to India via an underwater pipeline, prospects for expanding existing volume moving to Turkey, and the continuing saga of a pipeline to Pakistan.

Aside from some additional gas moving to Turkey that could be transited on to Europe, these pipeline projects pose little direct competition to main Gazprom revenue sources.

LNG, however, is quite a different matter.

LNG involves cooling natural gas to liquid form and then transporting it in specially designed tankers. It is then regasified on the receiving end and injected into existing domestic pipeline networks. LNG allows the formation of markets and hubs where major pipeline interchanges do not currently exist.

That’s the problem issuing from Frankfurt…

Gazprom’s is Years Behind in the LNG Race

As the movement for Iranian LNG projects intensifies, Gazprom’s traditional delivery approach comes under further strain. Iran potentially has more natural gas than even Russia, is prepared to provide consignments at lower cost, and is becoming the darling of the international investment community.

Gazprom, meanwhile, has been late getting into the LNG race. The Sakhalin II project off Russia’s Pacific coast is producing LNG, and exports have been moving to Asia. But attempts to add volume there has been stymied by rising competition from Australia and Papua New Guinea.

Its major Yamal LNG project in the very north of Russia, the one that was supposed to have made a major entry into European and other markets, is experiencing bureaucratic and operational problems. There is little left for Gazprom to fall back on.

The company used to deprecate LNG as an alternative to piped gas, claiming the cost would never be competitive. Not anymore. Figures agreed to in Frankfurt indicate massive increases in the capacity of global LNG terminals (some of them in the hands of publicly traded companies), with LNG demand rising to meet it by 2023.

By that time, the Gazprom model will have been supplanted and both Europe and Asia will be receiving ever increasing shipments of LNG in preference to Russian gas via pipeline.

No wonder the Gazprom guys looked concerned. They have every reason to be.