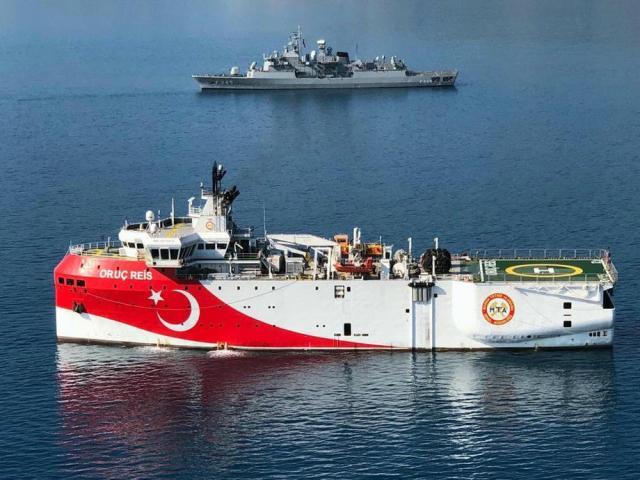 The situation concerning the Turkish research vessel Oruc Reis, which entered the easternmost point of the Greek continental shelf yesterday, is unchanged today, the Athens-Macedonian News Agency has reported.

Oruc Reis is accompanied by Turkish naval units, while the situation is being monitored by the Greek Armed Forces, the Greek news agency has reported.

Tension has re-escalated in the east Mediterranean since yesterday afternoon, with Turkey disputing, in practice, the Greek-Egyptian EEZ agreement through the presence and maneuvering of its Oruc Reis research vessel and Turkish warships.

Turkish survey systems are believed to be ready for application, but, according to Greek estimates, research work cannot proceed as a result of noise being generated by nearby ships, both Greek and Turkish.

Greek navy units, lined up opposite the Turkish ships, are seeking to prompt a Turkish withdrawal. The Greek Air Force and Army are also on standby.

Posting on Twitter, Cagatay Erciyes, a senior Turkish Foreign Ministry official, noted that Greece has created problems because of a 10-square-kilometer Greek island named Kastellorizo, which lies 2 kilometers away from the Turkish mainland and 580 kilometers from the Greek mainland.

“Greece is claiming 40,000 km2 of maritime jurisdiction area due to this tiny island and attempting to stop the Oruc Reis and block Turkey in the eastern Mediterranean.

“This maximalist claim is not compatible with international law. It is against the principle of equality. Yet Greece is asking the EU and US to support this claim and put pressure on Turkey to cease its legitimate offshore activities. This is not acceptable and reasonable,” he said.

Cyprus has responded by issuing a Navtex of its own, effective from today until August 23, through which it notifies that the Turkish research vessel Oruc Reis and accompanying vessels are conducting illegal operations within Cyprus’ EEZ.