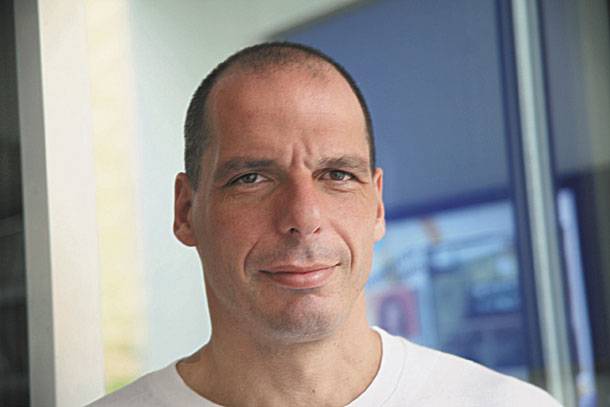 Greece΄s finance minister said Wednesday after a meeting at the European Central Bank that things can΄t go on as before, challenging the country΄s European creditors to lighten the austerity load on the debt-ridden state.

The country΄s new leaders are on a whirlwind tour of European capitals, looking to convince officials they have a viable debt-repayment plan but need some more time to present it.

But after friendly receptions in France and Italy earlier this week, the meetings of Greek Prime Minister Alexis Tsipras and Finance Minister Yanis Varoufakis on Wednesday mark a new phase, as they meet with more skeptical leaders.

Speaking to reporters outside the ECB following a meeting with the bank΄s head Mario Draghi, Mr. Varoufakis said his government had “unwavering determination that it can΄t possibly be business as usual in Greece.”

Mr. Varoufakis said that he had a “very fruitful” discussion with the ECB head.

The meeting of Mr. Varoufakis with the ECB president was the first of several in the next day between Greek officials and their European peers that will take the country΄s leaders from Frankfurt to Brussels, Paris and Berlin.

The aim of the meetings is twofold: pressing European government to ease the terms of Greece΄s international bailout while convincing the ECB to maintain the flow of funding to Greek banks.

The challenge remains formidable: Europe΄s paymaster Germany has so far been cool to the Greek proposals while the ECB has also signaled it is not ready to soften its stance.

The ECB supports Greek banks through its normal lending operations, which require the country΄s banks to post adequate collateral, and via a separate emergency lending program from the Greek central bank which requires ECB approval.

ECB officials have signaled they are unlikely to soften their position that Greece must agree to terms with its international creditors to maintain the flow of central bank money.

In European financial markets Wednesday, investors seemed to take a reality check after a euphoric rally a day earlier on hopes of a Greek debt deal. Those hopes may have been premature, warn some analysts, pointing to a meeting looming Thursday with German Finance Minister Wolfgang Schäuble in Berlin.

France could be a key political ally. Officials in Paris have already said they are willing to help the Greeks craft a new bailout program that would respect some of the economic promises Mr. Tsipras made in the election campaign that brought his radical left Syriza party to power.

A Wednesday meeting between French President François Hollande and Mr. Tsipras will test whether the initial warm overtures will continue as reality sets in: The French government says it nevertheless wants its money back and Greece΄s mountain of debt to European countries must be paid.

In an interview with the Italian daily La Repubblica, Mr. Varoufakis said his European tour wasn΄t to ask for favors, but rather to set out an agreed program for the repayment of Greece΄s debt.

He said Greece has started negotiations with the International Monetary Fund on a plan to help the country better manage its debt repayments.

The finance minister said the debt owed to the ECB would be paid back in its entirety, in keeping with current terms. However, for the money owed to the IMF and individual countries, Greece will propose issuing new bonds at market interest rates, he said, adding there would be a clause saying “we will begin the payback in full, when Greece has begun solid economic growth.”