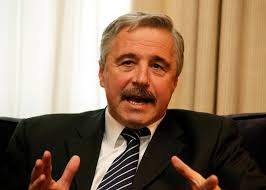 “It is important that we are supporting and bolstering Europe’s energy security with sources provided by EU countries,” the minister told “Parapolitika” radio. “Energy security is the leading matter preoccupying the European Union, and was the main topic at the latest European Council summit meeting…Unfortunately, the EU depends on energy imports from non-EU members.”

Commenting on hydrocarbon exploration and exploitation in other parts of the world, the Greek minister said the sector has contributed to the prosperity of people in countries such as the UK and Norway, while adding that energy deposits had proven to be detrimental for other regions.

“Our objective is for the hydrocarbon deposits to function as an oasis of peace, for the common benefit of all people in the southeast Mediterranean,” Maniatis remarked.

The minister expressed satisfaction about two collaborative regions being developed, one involving Greece, Cyprus, and Egypt, the other Greece, Cyprus and Israel.

“The message being conveyed by Greece and Cyprus is that these are collaborations that do not oppose any third party. On the contrary, these collaborations would gladly be expanded to include other regional countries,” Maniatis remarked.

As for Greece’s energy policy and the effort to upgrade the country’s geopolitical standing, Maniatis noted that, besides the current international tenders for hydrocarbon exploration and exploitation, the country is also seeking to help initiate the development of significant infrastructure for the wider region. The minister mentioned a plan for the EastMed Pipeline, intended to transmit natural gas from deposits located within Cyprus’s exclusive economic zone (EEZ) to Europe via Crete, mainland Greece, and Italy. Maniatis reminded that such a natural gas transmission route does not exist in the EU. Maniatis also referred to another prospective and ambitious pipeline route, to run from the Aegean all the way up to the Baltic states, as a project that needs to be discussed with neighboring states.