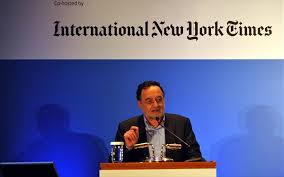 Reiterating views expressed just days ago at a meeting of energy ministers in Brussels, Production Reconstruction, Environment and Energy Minister Panayiotis Lafazanis has stressed Greece will not become an energy satellite state for any major power, but, instead, is pursuing a multi-dimensional and multi-sided energy policy.

The minister’s latest comments were delivered late yesterday at the Athens Energy Forum 2015, organized by the International New York Times.

The minister also spoke of “major capitalist nations viewing control of energy options as a means of overruling smaller nations in danger of being turned into the playthings of major multinational giants.”

He noted that the energy sector is “not a field of unrestrained profit-seeking speculation but a social good.”

Lafazanis reiterated his opposition to the European Commission’s authority over agreements signed between EU member states and non-EU members. “Greece will not become anybody’s dependent pawn in the so-called name of reducing the EU’s energy supply dependence on sources,” noted the minister, implying the Greek government’s effort to establish ties with countries such as Russia.

Commenting on natural gas infrastructure, Lafazanis said energy routes and platforms “are not just pipelines but precious tools that need to connect people of nations along ways of peace and growth.”

On hydrocarbon exploration, the minister noted that the government’s priority is to “mark out sea zones with neighboring countries based on faithful implementation of the Law of the Sea.”