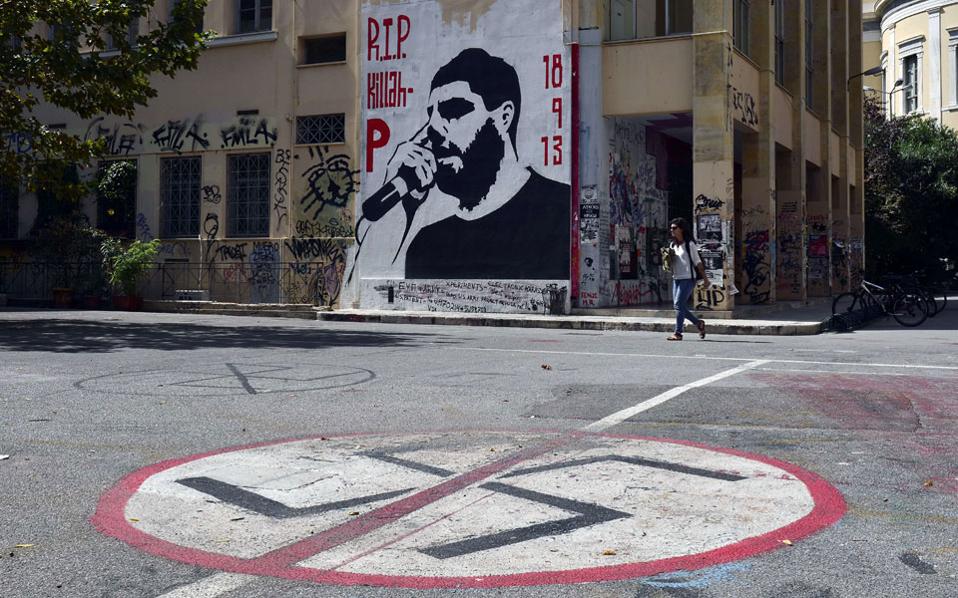 The flowers next to the memorial of antifascist rapper Pavlos Fyssas, who was stabbed to death by a Golden Dawn supporter in September 2013, are fresh. One would expect that the decision to postpone the trial against 69 members of the neofascist party, including senior officials, would dominate conversation in the western Athens suburb of Keratsini. Most people, however, prefer not to talk about it.

“It is not spoken of. After all, how could one express support for the party after the killing?” said a shop owner near the site of Fyssas’s murder. “However, behind the ballot booth curtain they can do what they like.”

Despite support having dropped off during the last national election in January, Golden Dawn’s performance in Keratsini and the neighboring Nikaia and Perama districts has been above the national average. The party picked these neighborhoods as political battlegrounds against its ideological rivals. They are the same places where GD members and supporters have been charged with criminal acts including the attack on PAME unionists and the beating of Egyptian fishermen.

“They are keeping a low profile,” said Keratsini Mayor Christos Vrettakos. The last time that members of Golden Dawn carried out a provocative act as a group was on January 14, the day after the party announced its candidates for local elections in Piraeus. Its members marched in Keratsini, took down a banner in memory of Fyssas, and raided anarchist hangout Resalto. “They mostly shy away from provocation – also because of the trial. However, their polling power remains strong,” Vrettakos said.

GD garnered 7 percent in Keratsini and 9 percent in Perama. However, locals point out that there is no trouble in the streets any more. Things were different in the past, as GD appeared to up the ante each time a party member was put in detention. A year ago, GD local leader in Perama Pericles Moulianakis, who also ran for deputy regional governor in Piraeus, said in a campaign rally: “Those servants that are PAME will be over. We shall terminate them and that is a promise,” in reference to the Communist-affiliated trade union.

During an event outside GD’s Perama offices in November, speaking on the phone from inside Korydallos Prison, MP Yiannis Lagos repeated similar threats. “We have been and we still are their opponent, their only enemy, their nightmare,” he said of the Communist Party of Greece (KKE). At the same event, Sotiris Develekos, former chauffeur of GD party leader Nikos Michaloliakos, said that after the party’s senior officials have been released from custody, “everyone will be held accountable.” “Piraeus has ports and seas, which is something that the ‘unwashed’ do not like, and they may find themselves in for some headlong dives,” he said of leftist supporters.

Since then, however, according to shopkeepers, workers and teachers in Perama, GD members and supporters have all but withdrawn. People speak less. The trademark black T-shirts emblazoned with the party’s emblem are no longer worn by pupils at schools. The union set up in the shipbuilding zone remains officially active, but has no other presence. Even the slogans targeting KKE and immigrants that were painted in downtown Perama have been removed. Those who used to openly back GD are less keen to do so, locals say. Meanwhile, people who in the past received goods during the party’s handouts have since turned to other organizations for help, including antifascist groups.

Local government officials express concern at the fact that little action has been taken at schools. Authorities in Perama are mulling an antifascist graffiti festival, while in Nikaia leftist officials have suggested awareness-raising talks to inform people of Golden Dawn. Some 500 pupils have been taken on educational tours this year to learn about the battle between communist-dominated EAM/ELAS resistance fighters and the German occupation forces on October 13, 1944, when the former succeeded in defending the power station at Keratsini from the latter, who wanted to destroy the local infrastructure.

“This is a neighborhood of refugees,” Vrettakos said of Keratsini. “We need to turn to history to show what fascism really is.” However, he points out that GD remains strong in very poor areas. Meanwhile data from the free clinic set up in Perama and Keratsini by Doctors of the World are devastating. About 10,000 uninsured and poor people flocked to the clinic for medical aid or help last year, up from 7,000 in 2013. “We used to rely on construction and shipbuilding, both of which have collapsed,” Vrettakos said. “Unfortunately, this is a breeding ground for frustration.”

The trial of Golden Dawn’s leadership and members, which began on Monday morning in Athens, was adjourned until May 7 amid reports of attacks on witnesses.

The trial was adjourned after it emerged that one of the 69 defendants did not have a lawyer. A total of 44 defendants appeared in the special courtroom set up inside Korydallos Prison, but these did not include Michaloliakos and other senior MPs such as Christos Pappas and Ilias Kasidiaris.

Journalists were told that witnesses of Fyssas’s murder and a number of students were attacked by GD supporters as they arrived at the prison, despite a heavy police presence.

Local authorities and residents protested the decision to adjourn the trial as their appeal for the proceedings to be moved to another venue is not to be heard until May 7. Locals object to the trial taking place at Korydallos as they fear unrest.