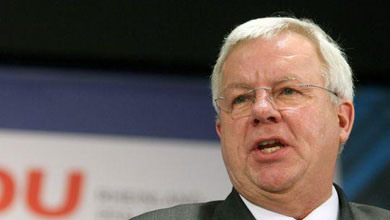 Eurozone politicians are not obliged to rescue Greece as the country is no longer of systemic importance to the single currency bloc, a senior member of German Chancellor Angela Merkel’s party was quoted as saying.

In an interview with Rheinische Post newspaper published on Wednesday. Michael Fuchs also said Greek politicians could not now «blackmail» their partners in the currency bloc.

“If Alexis Tsipras of the Greek left party Syriza thinks he can cut back the reform efforts and austerity measures, then the troika will have to cut back the credits for Greece,» he said.

«The times where we had to rescue Greece are over. There is no potential for political blackmail anymore. Greece is no longer of systemic importance for the euro.”

The remarks by are the clearest warning yet to Greek voters from a senior German politician that Athens might lose support if it flouts the terms of its 240 billion euro EU/IMF bailout after early elections next year.

Fuchs, deputy parliamentary floor leader of Merkel’s Christian Democrats, has frequently expressed frustrations felt by many politicians and the German public about the pace of reform and political hold ups in twice-rescued Greece.

Polls suggest that SYRIZA will emerge as the strongest party in the January 25 election, although its lead has narrowed.

The party wants to cancel austerity and a big chunk of national debt but says it will keep Greece in the eurozone.

«Further debt cuts will be needed again and again, unless the country is released from the euro zone and allowed to regain its competitiveness by devaluation,» he told German daily Tagesspiegel.

On Monday, German Finance Minister Wolfgang Schaeuble warned Greece against straying from a path of economic reform, saying any new government in Athens would be held to the pledges made by the current government of Premier Antonis Samaras.