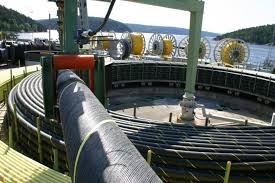 Development of the Euroasia Interconnector, a prospective energy project that promises to bridge the eastern Mediterranean region, remove Cyprus from its power isolation, and also link the region’s rich energy deposits with European markets, stands as Greece’s next major challenge following the recent official launch of work for the local segment of TAP, the Trans Adriatic Pipeline, to carry Azeri natural gas to Europe via Greece’s north.

The proposed Euroasia Interconector, envisioned to link Greek, Cyptiot and Israeli power grids via an extensive submarine power cable via Crete, was at the core of three-way talks in Nicosia in January between Tsipras and his Cypriot and Israeli peers, Nikos Anastasiadis and Benjamin Netanyahu, respectively.

The three leaders signed a declaration during that meeting pledging support for energy networks that will bolster security for their counries and the region. It was also agreed to establish a special committee to be charged with promoting the common energy-related goals of Greece, Cyprus, and Israel.

To measure 1,500 kilometers in length and offer a 2,000 MW capacity, the Euroasia Interconector is planned to be divided into three segments, one linking Israel and Cyprus, the other Cyprus and Crete, and a third section interconnecting Crete with the wider Athens area in the Greek mainland.

The project’s Crete-Athens interconnection does not contravene or eliminate a plan for a smaller interconnection being planned by IPTO, Greece’s power grid operator, to offer needed support for Crete’s insufficient and high-cost electricity system. As a result, old petrol-fueled power stations on the island will be withdrawn from use.

Development of the Euroasia Interconector’s submarine power cable linking Cyprus and Israel could begin in 2017 and be completed by 2019. The Cyprus-Crete segment’s interconnection could by fully operational by 2022.

The project’s technical and environmental studies are being conducted by Italy’s CESI. Required marine studies are nearing completion. The Euroasia Interconector will be developed by Euroasia Interconector Limited, the consortium formed for the project, which has been classified as a Project of Common Interest (PCI) by the European Commission, enabling EU funding. The Greek State and IPTO will not need to contribute to the project’s financing.