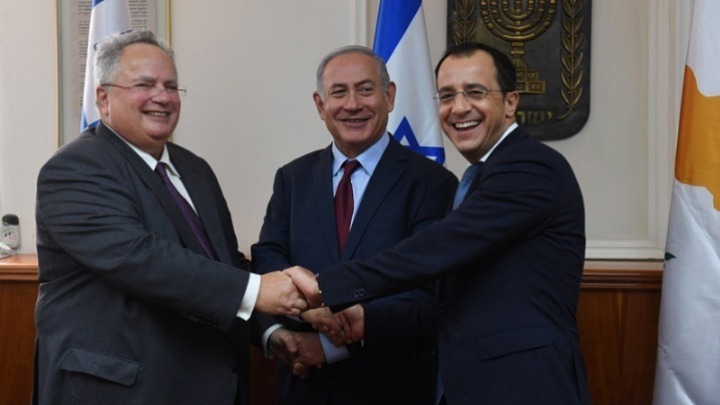 A trilateral meeting between Greek Foreign Minister Nikos Kotzias, Cyprus Foreign Minister Nikos Christodoulides and Israeli Prime Minister and Foreign Minister Benjamin Netanyahu held in Israel focused on expanding cooperation in energy.
In statements after the meeting held on Thursday, they emphasised the importance of cooperation spanning several sectors. Netanyahu emphasised the energy sector and the strong interests in developing an Eastern Mediterranean pipeline, noting that this could be one of the major submarine pipelines worldwide “and we naturally consider it important.”
Equally important, he added, was that countries respect internationally recognised territorial waters.
Kotzias said their talks had also covered the situation in the Middle East and Syria, stressing the need for a peace plan. “We are three countries that love peace and democracy and for this reason we want to develop our cooperation. We have many ideas and thoughts that we will discuss,” he said.
Christodoulides noted the importance of the trilateral cooperation developed by the three countries: “This is the second time we are in Israel in six months. It is important that our cooperation, the cooperation of three predictable, reliable democracies is viewed by the international community as having added value for stability in the region. Our cooperation is recognised as a pillar of stability and I look to today’s talks, and through substantive talks and decisions, not only to enhance our cooperation but open the way to expanded regional cooperation,” he said.
After the trilateral talks, Kotzias had a bilateral meeting with Netanyahu. According to diplomatic sources, this focused on developments in the Balkans and the Middle East, with emphasis on Syria. Kotzias briefed the Israeli prime minister on Balkan developments and said that Greece is promoting cooperation and supports the European prospects of Balkan countries.
They also discussed the future of the EU and expressed concern over the rise of populism, while Netanyahu welcomed the agreement for resolving the name dispute with FYROM as an important element for stability in the region.