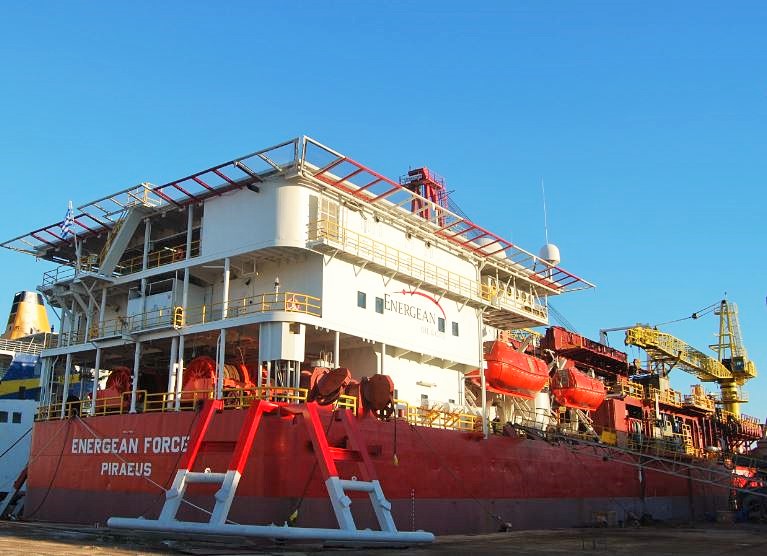 The ceremony signals the launch of the biggest drilling program to be carried out at the Prinos Oil field, in northern Greece, since its development began.

Energean Force was recently purchased from the German firm KCA Deutag and has undergone full refurbishment in order to conduct the drilling of 15 wells at the Prinos, Epsilon and Prinos North oil fields as part of a 200-million-dollar investment program, which also includes the installation of a new platform (SIFT) in the Gulf of Kavala, northern Greece.

Energean has planned to develop 30 mmboe (2P) reserves which are independently audited by ERC Equipose, aiming to increase total production to the level of 10,000 oil barrels daily. Assuming that the Brent price varies between $55 and $70 per barrel, Energean estimates that the benefits (taxes, royalties etc.) for the Greek State will exceed 400 million dollars. Of this amount, more than $60 million will aid the local community through the 5% regional tax by Greek law. There are also multiple direct and indirect gains to be made, including about 50 new jobs which will be added to the existing 307 employees who work at the Prinos offshore platforms, as well as at the onshore facilities in Nea Karvali.

On the occasion of the Energean Force launch, Energean Oil & Gas chairman and CEO Mathios Rigas stated: “Today is an especially important day for our company and the local economy of Kavala as well as for the Greek economy as a whole. In particularly adverse circumstances, Energean is undertaking a large investment program with 15 new drillings at Prinos. This program is a sine qua non for oil activity to continue and for employment opportunities to be further enhanced in the region. Through increased oil production, the program will guard Prinos against fluctuations in international oil prices which can often be quite violent, as has been the case in the past months. The company, our scientists and our staff can guarantee the development of proven oil reserves in the Kavala Gulf to the benefit of the local community and the Greek economy, always in conditions of absolute safety, in perfect harmony with tourist activity and fully respectful of the region’s unique natural environment. With the help of Energean Force, Prinos is advancing into a new era.”