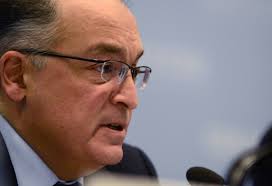 Judging by yesterday’s absence of any reference to the stalled sale agreement of a 66 percent stake of DESFA, Greece’s natural gas grid operator, to Azeri company Socar, during a meeting between Production Reconstruction, Environment and Energy Minister Panayiotis Lafazanis and a team of Socar and BP officials, the deal can be considered all but over.

Even though the meeting was staged for talks on the Southern Corridor, the TAP (Trans Adriatic Pipeline) project being a key part, some reference to the blocked 400 million-euro DESFA deal would have been expected, considering the officials who took part.

Elshad Nassirov (photo), Socar’s Vice President for Investments and Marketing, his deputy, Annar Mammadov, and the Azeri Ambassador to Athens, Rahman Mustafayev, did not utter a single word on the long-delayed DESFA deal, according to officials who attended the meeting.

“Not even the slightest of hints were made by anybody on the DESFA sale. We only discussed the TAP issue,” noted one official, referring to an effort being made by the recently elected Greek government for more favorable terms in exchange for the pipeline’s crossing through Greece. TAP will transmit Azeri natural gas to Europe via Greece.

Although Azeri officials continue to publically contend that Socar is still interested in the DESFA deal, it has become somewhat of a common secret that the Azeri company has, for some time now, been looking for the safest way out. Socar holds a 20 percent stake in the TAP consortium, as does BP.

It is believed that Socar has been discouraged by the newly elected Greek government, which has not shown an investor-friendly face, as well as the European Commission’s strict reaction to the non-EU company’s interest in the EU-based company.

An end to the DESFA saga would be expedient for all sides. The new Greek administration has made clear it intends to maintain sovereign control of the country’s energy networks, while the EU has been hostile to the Azeri company’s interest in getting a foot through the EU door. All sides now appear to be maneuvering for the deal’s cancellation without being charged responsibility for the debacle.

Highlighting Socar’s detachment from the deal, it was reported yesterday that the recent suspension of a European Commisssion investigation into the DESFA deal, reached by the previous Greek administration, was instigated by the Azeri company, not the EU executive body, as had been believed.

As for TAP negotiations prompted by the Greek government’s push for more favorable terms, it was agreed, during yesterday’s meeting, to set up representative committees. It is believed Greece will push for lower natural gas prices, and contary to preceding intentions, will not demand transmission fees and a stake in the TAP pipeline project.