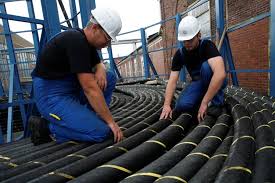 During yesterday’s signing ceremony for deals to interconnect the Cycladic islands with the mainland’s electricity grid, the speeches delivered by leading sector officials all made note of the interconnection endeavor’s next major challenge, this being Crete, Greece’s largest island.

The president of RAE, the Regulatory Authority for Energy, Nikos Vasilakos, described the plan to interconnect as many Greek islands as possible to the grid as a strategic objective. He referred to a study conducted by RAE in 2011 for Crete’s interconnection, and also called for the project to be included in the Ten-Year Transmission System Development Program (2014-2023) run by IPTO, Greece’s Independent Power Transmission Operator, locally known as ADMIE. The RAE chief also appealed for Crete’s interconnection project to be completed sooner than scheduled, by 2019 or 2020, if possible.

Taking a similar course with his speech, the Environment, Energy & Climate Change Deputy Minister Asimakis Papageorgiou, noted that the Cyclades interconnection project would offer electricity consumers annual savings of 100 million euro. The annual savings amount, he noted, would reach half a billion euro should the Cretan project, promising to save 400 million euro a year, also be completed.

Energy Ministry officials explained that, based on all the preliminary work conducted to date, conclusive studies for the project are expected in 2018. The Cretan interconnection project’s tender and beginning of development could then be expected in 2020, while the project would be operational in 2022, the officials said.

One ministry official noted that an effort was currently being made to quicken all procedures by two years and deliver the project in 2020.

The thought of using the Peloponnese as a base for Crete’s interconnection with the mainland grid appears all but vanished as a result of a lack of infrastructure at this location. In this case, seaside Lavrio, in the wider Athens area’s southeast, will be used as the project’s base.

The Cretan interconnection project’s initial budget amounts to one billion euro. It is estimated that amortization for the investment will be achieved in about two-and-a-half years, as is also the case for the Cyclades project.