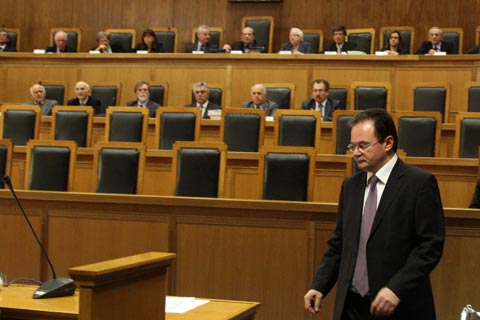 On the second day of the trial of former Finance Minister Giorgos Papaconstantinou, who is accused of tampering with the so-called Lagarde list of wealthy Greek savers, a prominent professor of constitutional law claimed that the charges have expired under the statute of limitations.

The statute dictates that offenses attributed to ex-ministers expire if two parliaments have sat since the alleged misdeeds occurred. As Parliament convened in May 2012, albeit for just one day following the first of two successive general elections, the offenses have expired, Nikos Alivizatos told the special court.

He was referring to the charges of doctoring a document and attempted breach of faith faced by Papaconstantinou.