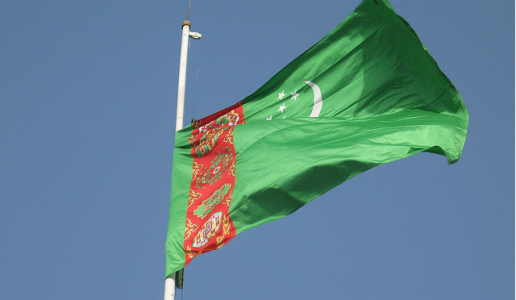 In April 2014, there was an upbeat meeting  between Rovnag Abdullayev, head of Azerbaijan’s state oil company SOCAR and Turkmenistan’s President Gurbanguly Berdymukhamedov,  in which “implementation of joint projects on construction of gas transit pipelines that are of great importance” was acknowledged, “ given the growing needs of the world market in stable supplies of energy.”

Then there was a second meeting of Abdullayev and Berdymukhamedov  in September in Ashgabat and an ambitious statement was issued about “the possibility of building a trans-Caspian gas pipeline, settlement of the disputed oil fields in the Caspian Sea, and joint protects in the energy sector.”

According to Oil and Gas Eurasia, on October 22,  Trend News Agency of Azerbaijan,  citing Energy Minister Natig Aliyev, reported that the European Union was planning to hold another trilateral round of talks with Azerbaijan and Turkmenistan regarding the Trans-Caspian Pipeline (TCP).

EU Energy Commissioner Günther Oettinger proposed another round of trilateral negotiations, but Turkmenistan delegation failed to show up “for some reason.” Aliyev said he was assured there would be subsequent meeting but a date has not yet been set.

Was the meeting not important enough to Ashgabat, as it might once have been?

Yet after last year’s agreement between Ashgabat and Ankara to deliver Turkmen gas to Turkey ( now Ashgabat’s second largest trading partner after China), which was reiterated in June, it seemed as if the TCP might progress further. There were also promising talks in September among Oettinger, Turkey and Turkmenistan, specifically about adding Turkmen gas to TANAP, following on other promising meetings and statements earlier in the spring and summer.

These talks, like many in the past 23 years since independence, have foundered on the inability of Turkmenistan and Azerbaijan to resolve their dispute about demarcation of the Caspian Sea bed between their countries. This bilateral stumbling block is certainly aggravated by the fact that neither Russia or Iran has any interest in removing it, given their differing views on equal sharing of Caspian Sea resources rather than division by national boundaries. Even so, it had appeared as if the multilateral approach to pipelines crossing borders might prove a workaround. What happened?

Something could have changed for Turkmenistan at the Minsk summit of the Commonwealth of Independent States on October 11, says sources preferring anonymity, familiar with internal Turkmen government politics. Ashgabat may have been persuaded not to deal with the EU or to cooperate with Russia more. Perhaps, given the forthcoming withdrawal of American troops from Afghanistan, Turkmenistan’s need for assistance from Russia and its neighbors was invoked to address the growing Taliban threat on Turkmenistan’s borders which has led to a number of  incidents this year in which guards were killed.

Or perhaps Turkmenistan’s desire to expand cooperation with the West was tempered by the lack of progress at the Caspian littoral states’ summit on September 30, where, despite some agreements on issues like fishing, no movement was made on accepting a legal regimen for divvying up the Caspian Sea.

Or, said the sources, officials merely became preoccupied with the big event of Turkmen Independence Day October 27, when they had visiting foreign dignitaries and had to postpone negotiations abroad. There’s also always the possibility that China cautioned Turkmenistan against going further on projects with Europe but it has never commented publicly on that score.

The reasons for Ashgabat to fail to go to the next step with Europe might also be a function of internal stresses and disarray in the Turkmen oil and gas industry, heavily controlled by the president personally. There was an indication of a brow-beating session more severe than usual with Berdymukhamedov and his ministers in August, the Russian oil and gas publication neftegaz.ru reported.

The Turkmen leader frequently berates his ministers even as production is described in overly-glowing terms as over 100%. At this summer cabinet meeting, however the president was “very strict but fair.” Baymurat Khojamuhammedov, the deputy prime minister responsible for the oil and gas sector said production of various petroleum products was up, as was gas and oil extraction, and efforts to control consumer use of gas in both industry and public institutions were improving.

Another official who gave a talk about new oil rigs with modern technology that would increase output, was found unsatisfactory and told to work harder, although without a formal reprimand.  The president expressed dissatisfaction with the industry, noting obliquely how “the rapidly-changing situation in international politics and the world economy has an influence on the market of energy resources.”

Then when it came the turn of Tachberdy Tagiyev, general director of the Turkmenbashi Oil Refinery,  who spoke about increasing the depth of  oil refinement, the Turkmen president issued him a formal reprimand, urging him to rectify his unspecified shortcomings immediately.

Two months later, Tagiyev then lost his job for his “serious lapses” — again, unspecified, but related to the reconstruction of the Turkmenbashi facility, in which a number of foreign companies are involved.  Tagiyev, once the deputy prime minister for oil and gas who dealt with foreigners on the Trans-Caspian Pipeline, was arrested on corruption charges several years ago and then was missing for a time before he was sent to manage the Turkmenbashi plants.

Another official.  Charymuhammed Hommadov, assigned to the state agency Turkmengas when his predecessor was sacked in January , reported on progress with LNG, but also got a reprimand. In berating Hommadov for poor management, Berdymukhamedov made vague reference to “the importance of planned growth of the volumes of extraction, the processing of natural gas and the diversification of deliveries of Turkmen energy abroad.”

Berdymukhamedov fretted that the plan for the oil and gas industry wasn’t being fulfilled, the volumes of extraction and new exploration of oil fields were not increasing, and most importantly, officials “are not working on the diversification of routes for delivery of natural gas, there are no projects for new gas pipelines, and it is not clear how the extraction of gas would be increased.” Yet the climate of terror these officials, long in the industry, are living in does not seem productive for their work. And the decision to start a new pipeline with foreigners would rest on Berdymukhamedov himself.

Though the Turkmen leader did not mention it, Turkmenistan’s East-West pipeline, once begun in 2007 with plans for Russia to build it, then when relations soured, offered as a tender to foreign companies in 2010 – and withdrawn – is still not finished, and still being built by domestic companies.

Management of the industry is indeed suffering as gas shortages and low pressure are now plaguing consumers even in this gas-rich state. This week,  village women were desperate enough to block roads in protest in Dashoguz province, Chronicle of Turkmenistan reported.

Interestingly, while it has once again pulled back from talks with the EU and hasn’t progressed with Azerbaijan, Turkmenistan went a step further with Turkey and signed a “framework agreement” to deliver gas to TANAP, Reuters reported November 7.

Under this agreement which remains only an outline as yet, Turkish President Tayyip Erdogan and Berdymukhamedov agreed in principle that Turkmengas and the private Turkish firm Atagas will purchase Turkmen gas for TANAP. But it remains to be seen how, when and whether a new pipeline will be laid under the Caspian Sea across the Turkmenistan-Azerbaijan border — when the demarcation issue has still not been resolved.

“We are working on alternative routes,” Atagas head Osman Saim Dinc told Reuters about the Turkmenistan-Turkey agreement — but it isn’t clear what those could be. The only other way out of Turkmenistan to link up to Azerbaijan that doesn’t involve Iran (which has ceased purchases) would be via Uzbekistan and Kazakhstan, then across the Caspian sea from Kazakhstan to Azerbaijan. But the Trans-Caspian Oil Transport System, a project begun in 2005 to explore the possibility of transport of oil from Kazakhstan to Azerbaijan across the Caspian in which France’s Total was also involved encountered fierce resistance from Russia and Iran, and the same kind of resistance should be expected to a natural gas pipeline.

Nevertheless, while Turkmenistan has its internal problems and its disputes with neighbors, it has pursued deeper relations with these  regional partners. Westerners have grown accustomed to thinking they are the only actors when it comes to circumventing Russia. But Russia’s allies are unhappy over the Ukraine adventure; some, like Azerbaijan, voted at the UN General Assembly for a condemnation of the forcible annexation of Crimea. This may explain why there are reports that Uzbekistan’s leader Islam Karimov discussed a “Central Asian Nabucco” with Turkmenistan’s President Berdymukhamedov during his trip October 23-24 to Ashgabat.

According to Deutsche Welle’s Vitaly Volkov, citing an informed confidential source in Ashgabat, Turkmenistan may also be contemplating a regional pipeline. Uzbekistan’s President Islam Karimov  was rumored to offer Berdymukhamedov “to join a ‘Nabucco’ pipeline construction project to circumvent Russia” during a trip  to Ashgabat last week.

Commenting on the story, exiled Turkmen opposition leader Nurmukhammed Khanamov told Volkov that the Turkmen leader is now interested in regional corridors through Turkmenistan, and Karimov has found common cause with them. “They both have the headache of Afghanistan and the uneasy situation on their borders” with the withdrawal of US forces from Afghanistan.

Ashgabat froze out Tashkent in 2002 when Uzbek agents were suspected of involvement in a coup against Turkmen’s past dictator Saparmurat Niyazov, but since then the two neighbors have grown more friendly. The well-connected Russian Central Asia reporter Arkady Dubnov says he could not confirm the story of the “Central Asian Nabucco,” although he did not think it was likely for the simple fact that “the Turkmen treasury is empty” and even Iran, for its small volume of imported Turkmen gas – now ended — “paid not in cash but in barter.”

Beijing has invested billions in Turkmenistan’s infrastructure, of course, but it is not prepared to raise the price of gas or give more loans, and Turkmenistan could be experiencing a cash crunch. Only Russia is paying “live cash” for its significantly reduced purchase of gas from Turkmenistan, says Dubnov.

That makes Dubnov conclude the “Central Asian Nabucco” concept is “not realistic” — and furthermore Karimov himself demonstrated more closeness to Moscow than usual during the recent Minsk summit. Like the source noted above familiar with Turkmenistan’s government, Dubnov, too, surmised that for Uzbekistan, the perceived threat from Afghanistan after US withdrawal of troops could draw Tashkent closer to the Kremlin.

Neither Central Asian government had anything to say publicly about any plans for regional pipelines other than to confirm that they discussed “cooperation within the framework of international organizations and regional structures.”