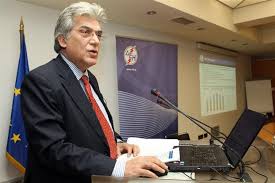 The Production Reconstruction, Environment and Energy Ministry is set to announce a decision on the new leader at PPC, the Public Power Corporation, within the week, possibly even today.

According to sources, three candidates have been shortlisted for the top job at PPC. Two of these, professors at the National Technical University (NTUA) and the University of Thessaloniki, respectively, stand as favourites, while a third candidate, linked to a political background, is the procedure’s outsider.

The power utility’s new chief executive will succeed Arthuros Zervos (photo), who resigned earlier this month after Council of Appeals Court Judges in Athens decided to send the PPC chief executive to trial in connection with excessive pay rises granted to 19 senior company officials between 2010 and 2012, breaking bail-out agreement conditions. Zervos’s resignation was also prompted by public resentment stirred up by his recent decision to sign a new three-year collective agreement with the power utility’s union of employees, which would lead to indirect pay rises.

Contrary to recent reports, the ministry will not opt for a two-pronged leadership at PPC with two officials serving as president and managing director. Latest reports indicated the two posts will be merged and covered by one official.

The new recruits will need to be approved by a parliamentary committee overseeing public utilities before they can be endorsed at a PPC extraordinary shareholders meeting, scheduled for this Friday. It may be rescheduled for a few days later.