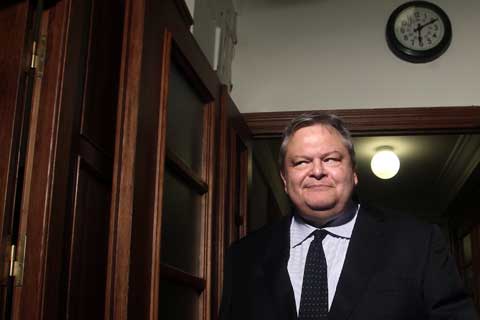 “We are faced with a very simple solution in order to restart negotiations. The solution is that [Turkey] puts an end to its violations of Cyprus’s sovereign rights,” Venizelos said in an interview with Turkish television, according to e.kathimerini.com.

Nicosia suspended its participation in peace talks in October after Turkey sent its seismic vessel Barbaros into Cyprus’ EEZ.

Commenting on Ankara’s oil and gas exploration inside the Mediterranean island’s maritime zone, Venizelos said that the trade agreement between Turkish oil company TPAO and the Turkish Cypriot administration in occupied Cyprus is not recognized by the international community.

The enclave, officially recognized only by Turkey, was carved up after Turkey’s invasion of north Cyprus in 1974, following a brief Greek-inspired coup.

On Saturday, Venizelos will hold talks with his Turkish counterpart Mevlut Cavusoglu. Venizelos, who is also Greece’s deputy premier, is further scheduled to meet with Turkish President Recep Tayyip Erdogan.

Meanwhile on Sunday, Venizelos will attend the Thronal Feast of St Andrew the Apostle at the Ecumenical Patriarchate in Istanbul. Pope Francis is also scheduled to attend.