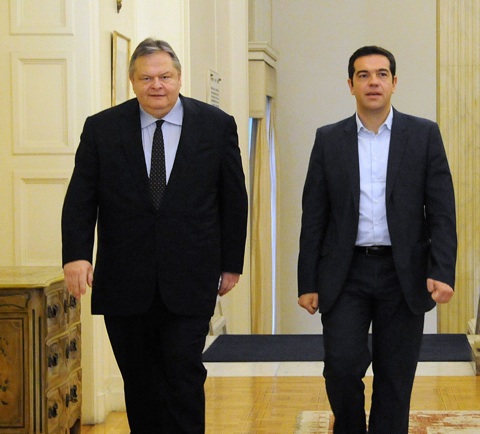 Foreign Minister Evangelos Venizelos and SYRIZA leader Alexis Tsipras held a rare one-on-one meeting Monday and agreed that Greece’s foreign policy should not be affected by domestic political differences though the fact that the encounter lasted for nearly two hours fueled speculation that other matters were discussed.

“Mr Tsipras and I had a very interesting and substantive discussion in the spirit of national consensus,” Venizelos said. Asked by reporters whether domestic issues were broached, the PASOK leader remarked, “Let’s stick to issues of foreign affairs.”

As Kathimerini reports, Tsipras struck a similar tone, noting that the talks focused “exclusively” on foreign policy and adding that issues of strategic national importance “should not be affected by domestic rivalries.”

“I feel that on issues of foreign policy there needs to be a national strategic plan,” said Tsipras, underlining the need for “calmness and clarity of thought.”

However the SYRIZA leader expressed skepticism about the decision to hold the next meeting of the Greek-Turkish High-Level Cooperation Council in Athens at the end of this week even as a Turkish research vessel remains in Cyprus’s Exclusive Economic Zone (EEZ). The fact that the Barbaros seismic vessel has been in Cyprus’s EEZ for the past month is “an extremely negative development,” Tsipras said.