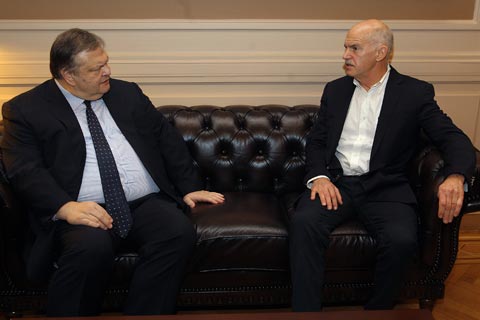 PASOK leader Evangelos Venizelos met briefly with his former Prime Minister of Greece George Papandreou ahead of a parliamentary vote for president on Tuesday, shortly after sources close to the latter suggested that he will be announcing the formation of a new political party at the end of the year.

Sources told the Athens-Macedonia News Agency that Venizelos asked Papandreou not to split from the party, which has seen its popularity nosedive since it has been at the front line of austerity policies demanded by the country’s creditors.

“The unity of PASOK is his moral obligation to the nation and the party,” Venizelos is quoted as saying about Papandreou, whose father founded PASOK 40 years ago.

“We have to fight the electoral battle together, whenever it may be,” Venizelos reportedly told the former PASOK chief.