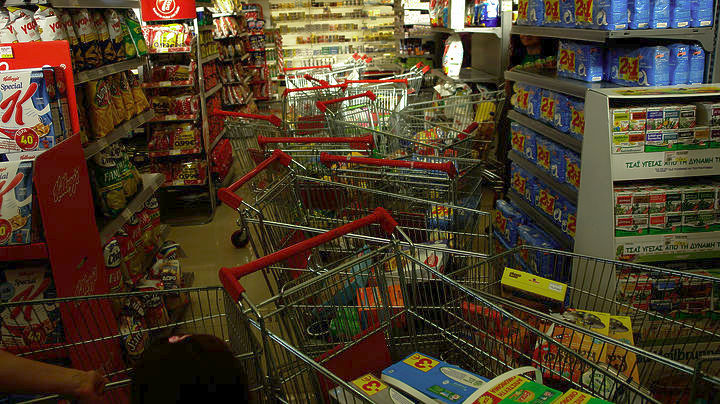 New laws obliging retailers to charge for plastic carrier bags have caused a sharp decline in their use at supermarkets during the first month of the law’s implementation, the Research Institute of Retail Consumer Goods (IELKA) reported on Tuesday.
IELKA carried out a survey of the estimated impact of the new legislation in reducing the use of plastic bags in food retail channels as part of its “Care Today, Live Better Tomorrow” action plan. The data collected concerned mainly supermarket chains, combined with estimates about the use of plastic bags in other types of sales outlets.
According to its findings, implementation of the measure is strict and universal in supermarkets, with data for January 2018 showing a 75-80 pct drop in the use of lightweight plastic bags in comparison with January 2017. This was combined with a 5,000 pct rise in the sales of reusable shopping bags.
IELKA estimates that this translates into the entry of roughly 2.5-3.0 million new reusable bags on the market, with two in three households opting for their use rather than paying for a disposable plastic bag.
Implementation in other retail channels and catering outlets is also high but with differences according to sector and area. Compliance is high in retail food shops (bakeries, butchers etc) and organised chains of stores. In other sectors, such as clothing shops, plastic bags are being replaced by other types of bags, such as paper.
Implementation in catering, by contrast, is low – with the exception of organised chains – as well as in street markets and kiosks that are exempt from the environmental charge, while compliance is higher in urban areas than in rural areas.
Consequently, the overall percentage reduction in the use of plastic bags is estimated to be much lower than in supermarkets, ranging between 65-70 pct.
According to IELKA calculations, even the optimal scenario of a 70 pct reduction leads to the consumption of 110 plastic bags per person a year and is insufficient to meet targets, especially as implementation in other countries has shown that the efficacy of the measure tends to taper off over time.
This fails to meet the EU target of restricting per capita annual use of lightweight plastic bags to 90 a year by the end of 2019, something that requires a reduction exceeding 75-80 pct.
IELKA called on all actors involved to continue to inform consumers about the real nature of the problem caused by plastic bags (marine pollution), to encourage the use of reusable bags and clarify the legislation to properly inform consumers and merchants.
The charge for plastic bags is set to increase to 0.07 euros plus VAT as of January 1, 2019 and this may prove sufficient to meet the EU goals while a total ban on use of plastic bags may later be adopted, according to the Hellenic Recycling Agency EOAN.