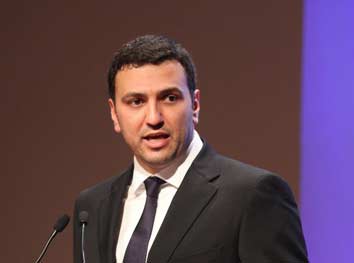 The US government is satisfied with the way domestic terrorism has been dealt with in Greece while recognizing the “optimal level” of cooperation between the two countries in combating organized crime, Public Order and Citizen Protection Minister Vassilis Kikilias said after completing his two-day contacts in Washington.

According to AMNA, Kikilias on Tuesday, the second day of his visit to the US capital, met with the US Justice Minister (Attorney General), Eric Holder, the Director of the Central Intelligence Agency (CIA) John Brennan, the director of the FBI James Comey, and officials of the White House and the State Department.

Security and terrorism issues dominated the meeting, according to a senior diplomatic source. US officials emphasized on the issue of information exchange and strengthening of operations for the monitoring and detection of foreign fighters, an issue of particular interest to the US, which is also discussed in meetings with government representatives and security services of allied countries.

Kikilias presented the Greek positions on a wide range of issues, such as international and domestic terrorism, international and cyber crime and discussed with them ways to further strengthen the cooperation between the two countries.

“I had the opportunity, in this very important trip organized by the Attorney General Eric Holder, to meet with senior intelligence and US Government officials and the Attorney General himself, with whom we discussed issues which have to do with common interests and common aspirations of the two countries in terms of security in the broader region of the Balkans and the Mediterranean,” Kikilias noted.

Kikilias also stressed that “Mr Holder expressed content on behalf of the US Government for the achievements of the Greek government lately on the issue of domestic terrorism,” adding that “he reaffirmed his own and his government΄s to cooperate in new challenges, such as cyber crime and the issue of jihadists.”

The Greek minister added that “the Greek government remains firm in its position on security in the region. Security is equivalent to the political and economic stability and constitutes the only way for investments and hence growth.”

Earlier on Tuesday, Kikilias had visited the CIA headquarters, where director John Brennan acknowledged the important role of Greece as a factor of stability in Southeastern Mediterranean and expressed his own and the US side΄s readiness to provide “all possible assistance” to the Greek efforts in security issues.

Then, he visited the FBI and met with its director James Comey. The two officials reaffirmed the “optimal level” of cooperation in the fight against organized crime.

Finally, the two sides reaffirmed the relationship of “mutual trust” and agreed to continue and “further strengthen” their cooperation in dealing with terrorism and modern security threats.

After a two-day visit to Washington, Kikilias will hold a series of meetings with US federal, state and local officials in Chicago, Boston and New York and will have meetings with members of the Greek American community. He will also attend and speak at an event co-hosted by the American Jewish Committee of Chicago and the Hellenic American Leadership Council on the October 28 ΄Ohi Day΄ national holiday.

On Thursday, he will be the keynote speaker at an event organized by the Fletcher School / Tufts University, in collaboration with the Konstantinos G. Karamanlis Foundation, in Boston.

His visit to the US will be completed on Friday with contacts in New York, where, among others, he is expected to meet with Archbishop Demetrios of America and chairman of the Committee on Foreign Relations of the Senate Robert Menendez.