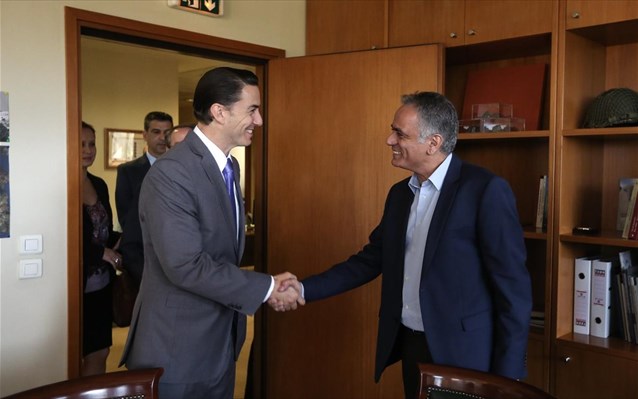 (UPDATE) Accelerating procedures for implementation of the TAP and IGB natural gas pipeline projects was the topic of discussions during a meeting on Wednesday between Environment and Energy Minister Panos Skourletis with Amos Hochstein, US special envoy and coordinator for international energy relations with Bulgarian Energy Minister Temenuzhka Petkova.

During the meeting, Skoutletis proposed improving the terms of TAP through Greece both for the state and local societies, while regarding the Greek-Bulgarian pipeline project IGB a new meeting -at ministerial level- will be held next week in Sofia.

The Greek side raised compensation issues for forest areas and state property and more action by the consortium in the field of corporate social responsibility. Amos Hochstein said there was significant progress regarding the Greek-Bulgarian pipeline and urged the Greek government and TAP to openly discuss pending issues and to find solutions the soonest possible.

“The US wants to continue working with Greece for the country’s energy security but mostly on the role to be played by Greece as a strategic partner in the region,” said Hochstein.

Earlier in the day, Energypress.eu reported:

Amos Hochstein, US Special Envoy and Coordinator for International Energy Affairs, is expected to push for swifter progress of the prospective Greek-Bulgarian IGB natural gas pipeline, a high-priority item on the US agenda, at a meeting in Athens today with Environment and Energy Minister Panos Skourletis.

Besides the IGB project, the two officials are expected to also discuss the TAP project, while talks on Russia’s latest pipeline proposal for Europe’s south may also be included on the agenda. Greek officials are remaining low-key about the Russian plan, currently blocked by Turkey’s stance.

Development of the IGB project would end Bulgaria’s current reliance on Russian gas as the pipeline will be connected to the Azeri-linked TAP (Trans Adriatic Pipeline). Following further development, it would eventually also help Romania, Serbia and Hungary, all greatly dependent on Russian gas, to also be supplied by other sources, such as Azerbaijan, via TAP, and Greece’s LNG terminal in Revythoussa, an islet in the Saronic Gulf, close to Athens.

Hochstein’s return to Athens follows Prime Minister Alexis Tsipras’s recent official visit to New York City, during which he met with Secretary of State John Kerry, who highlighted the strategic importance of the TAP and IGB projects in upgrading Greece’s role as an energy hub.

Development of the propective IGB project has been repeatedly postponed by investment plan delays in Sofia. At this stage, it seems the project is still a long way off, and will not be ready to operate by 2020, when it could supply Azeri natural gas to Bulgaria, via the TAP pipeline to run through Greece and across to Italy.

Pre-construction procedures planned by the IGB project’s corporation, ICGB, a 50-50 joint venture involving Bulgarian state-run company BEH and Poseidon (DEPA, the Public Gas Corporation, and Edison), including a second market test, have been marred by delays. Market tests, demanded by EU law, are conducted to determine the level of interest of prospective users. An intital market test staged in May, 2013, barely satisfied investor objectives. The follow-up test’s delay indicates that the beginning of construction is still a long away ahead.

Both the EU, which is financially backing the IGB project, and the US are keen to see the pipeline constructed as soon as possible to end Bulgaria’s dependence on Russia for gas supply.

From the perspective of Greek consumers, the IGB pipeline will facilitate supply from central European gas hubs, such as Austria’s Baumgartner facility. Russia is using up the entire capacity of an existing Greek-Bulgarian pipeline for its own supply needs.