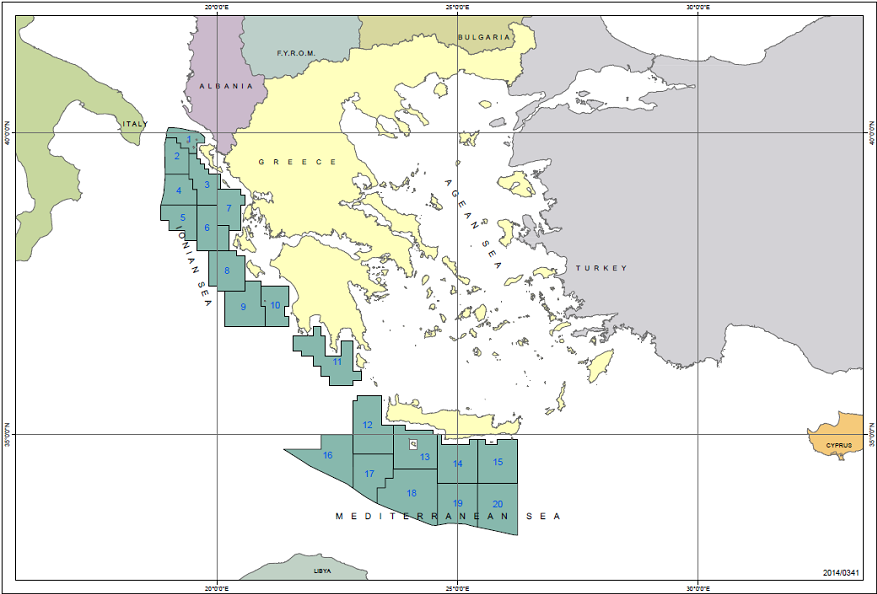 Nearly half, or nine of the twenty sea plots presented in London yesterday, ahead of an international tender for potential oil and gas exploration, are located south of Crete. An area south of the Peloponnese will also be tendered, while the other ten areas cover parts of the Ionian Sea, stretching out to a group of islets north and northwest of Corfu known as the Diapontia Islands.

The presentation, titled “Western Greece and Southern Crete: A Region for Exploration and Exploitation of Hydrocarbons in the Heart of the Mediterranean”, was made by Energy Minister Yannis Maniatis and his associates, with some 150 to 200 officials of the global petroleum industry in attendance.

The international tender’s announcement will now forwarded to the Official Journal of the European Union for immediate publication, to start procedures for the first round of plot concessions in Greek sea regions for exploration and exploitation of hydrocarbons.

Over 30 petroleum firms and more than 150 industry officials have registered to participate at a London conference, linked to the presentation, for talks with officials from the Norwegian firm PGS – it was commissioned to conduct seismic studies in Greek sea regions last year on behalf of the Greek state – the French Institute BEICIP Franlab, a hydrocarbons consultant for the Greek state, as well as Greek Energy Ministry officials.

Also taking part in the conference are officials of the oil majors, namely the British firm BP, English-Dutch corporation Shell, US firms Exxon Mobil and Chevron, as well as Italy’s Eni.