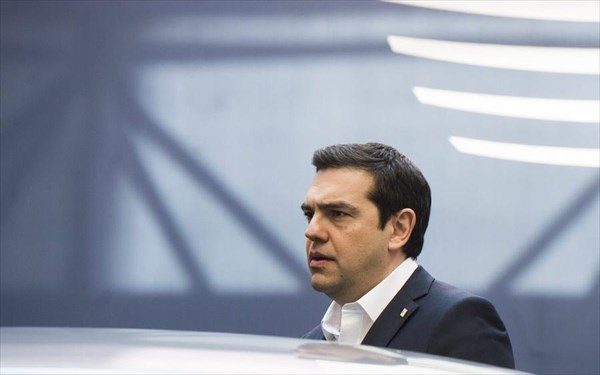 Pope Francis’s joint visit to the refugees on Lesvos with Ecumenical Patriarch Bartholomew and Archibishop of Athens and All Greece Ieronymos was a “historic meeting that sent out very strong, global messages,” Prime Minister Alexis Tsipras said in an interview with the state broadcaster ERT broadcast on Saturday night. He noted that the Greek people could feel proud of their welcome to refugees at a time when racism and xenophobia were growing in Europe, while he appeared confident that the Greek programme review can be concluded before Orthodox Easter.The visit by the three prelates had highlighted that Greece and the Greek people were defending universal human values at a crucial time, Tsipras noted in the interview shortly before his own departure from Lesvos. Greeks had shown humanity and solidarity to those in need, even though the country was facing immense economic difficulties and adversity as a result of the huge economic adjustment imposed on Greece by its creditors. At the same time, he added, “at the borders of some other European countries, we had scenes not in keeping with European culture.”Among others, the Pope’s visit had helped demonstrate that the problem was not Greek but global, while the presence of the Orthodox Church leaders at his side had its own significance, showing that the leaderships of the two Christian Churches were uniting their forces at a crucial time to highlight Christianity’s universal values. They also showed that Greece was not alone but needed help, since it was facing a global problem that it was unable to tackle on its own, he said.According to Tsipras, it was contradiction that some governments were erecting walls to “defend” a Christian Europe and he recalled instances at crucial summits where there were calls for pushbacks at sea and Greece was accused of being unable to defend its borders. “How can one defend sea borders without putting human lives at risk?” he noted.Commenting on the EU agreement with Turkey, Tsipras conceded that this was problematic and had “difficulties” but said that Greece was determined to implement this agreement “without violating international legality and our values.”“I prefer an agreement with problems over a non agreement because, if we did not have an agreement between the EU and Turkey, today we would be seeing the same or greater [migration] flows,” he said. Tsipras noted that the doomsayers criticising his visit to Izmir and his policy had been proved wrong. The events had shown that “in foreign policy, when you have a plan, you must also be bold,” he added.The prime minister made it clear that Greece would not allow procedures that were not in keeping with European rules, meaning that each asylum application must be examined individually on its merits and that there will be no ‘blanket’ rejections of applications based on nationality. According to Tsipras, it was Greece’s refusal to ignore its own values and trample on the refugees’ rights that had earned the country recognition.“This is Greece’s surplus – it might not be fiscal but it is a surplus of values,” he said.Greece must now press for the EU-Turkey agreement to be implemented, for relocation and resettlement processes to get underway and for Europe to share the burden of the refugees, he added.With respect to Greece’s readiness to host refugees, Tsipras said he had seen a huge difference in terms of the organisation and facilities compared with his last visit to Lesvos and noted that – with the exception of Idomeni where the camp residents remained of their own accord – there were now 40,000 places available for hosting refugees and migrants, most of them of very high standard.Greece’s administration had “performed a small miracle” given that “the weight of a whole planet has fallen on the shoulders of a small country in economic crisis, that the funds are not disbursed by the EU and we often have to fork out from our own pockets,” he said. Greece must now show solidarity, greatness of spirit and prove that it is a multicultural society, “where what is different and foreign is not a threat but a source of wealth,” he added.Commenting on the ongoing negotiations with the creditor institutions to wrap up the review of the Greek economic programme, the prime minister said that the goal of concluding this by Easter was feasible.“Everyone has understood, the international economic community and the Greek people, that Greece is at the end of a difficult adjustment,” he said, predicting that Easter Resurrection mass will also bring a revival of Greece’s economy without any additional measures.Tsipras noted that the agreement signed with the creditors in July 2015 had not called for further salary cuts or lay-offs but a much gentler adjustment that was one tenth that imposed by previous governments.“We will keep to the letter of the agreement and the letter of the agreement did not call for cuts to main pensions so there will be no cuts,” he added.He denied that Greece was “isolated” internationally, noting that the visit by the three prelates had proved this with respect to the refugee crisis. A recent White House announcement about U.S. President Barack Obama’s trip to Germany, which said the Greek crisis would be among the top issues discussed, also proved it for the economic crisis, Tsipras added, as was the European Central Bank’s (ECB) decision to include Greek banks in quantitative easing.The Greek people were like a runner near the end of the race, Tsipras concluded: “We have covered 90 percent of the distance and the last 10 pct remains but the fatigue is great. This 10 pct is perhaps the most difficult but we must all understand that the finish line is in sight.”