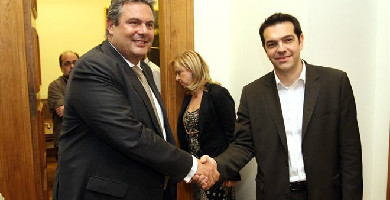 SYRIZA agreed on Tuesday to back an Independent Greeks plan for non-performing loans as the right-wing party agreed to support the leftists in their opposition to any candidate the government puts forward to succeed President Karolos Papoulias in February.

“There is a need for different forces, which see things from different viewpoints, to come together in order to stop the catastrophic policies of the memorandum immediately and then to rebuild the economy,” said SYRIZA leader Alexis Tsipras after meeting with Independent Greeks chief Panos Kammenos.

“We can find common ground, while each keeping our red lines, so we can progress to tomorrow,” said Kammenos.

Tsipras said SYRIZA would be in favor of an Independent Greeks proposal for dealing with overdue loans when it is submitted to Parliament. Kammenos said his party would refuse to back the coalition’s presidential candidate, which is in line with the leftists, who say they will vote against any nominee with the aim of triggering early elections.

PASOK spokesman Dimitris Karydis described the outcome of the meeting as “SYRIZA’s leadership aligning itself with the conspiracy-loving far-right.”

Tsipras was also due to meet To Potami leader Stavros Theodorakis this week but the latter cancelled the meeting.