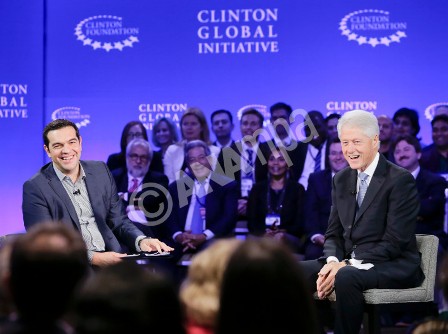 The return of growth and investments to Greece were key points emphasised by Greek Prime Minister Alexis Tsipras, in a one-on-one public discussion he held with former U.S. president Bill Clinton during the Clinton Global Initiative annual meeting in New York City on Sunday.

Tsipras responded to questions by the former president in an informal and amiable discussion before an audience. The talk was introduced by ambassador Gianna Angelopoulos-Daskalaki. Titled “Advancing Growth in Europe: The Greek Crisis & Beyond,” the conversation focused on how Greece could overcome the crisis. Tsipras focused on investments, which he said could be attracted from the United States Greek Americans but other countries of the globe as well. Greece had the advantages of a stable government and of serving as a stable reference point in a volatile area, the PM added. Growth and investments would benefit most from the lowering of the public debt, he stressed. Just as his government would honour its commitments to Europe, so should Europe honour its commitments to Greece, by helping it lower the public debt.

The prime minister emphasised research and technology as a sector in need of investments, saying this was also a sector that would help retain Greece’s precious human resources, its young people, who were leaving the country. He said his government was committed to reforming the public sector to aid in this endeavor, and understood that bureaucracy and tax laws also needed to be addressed.