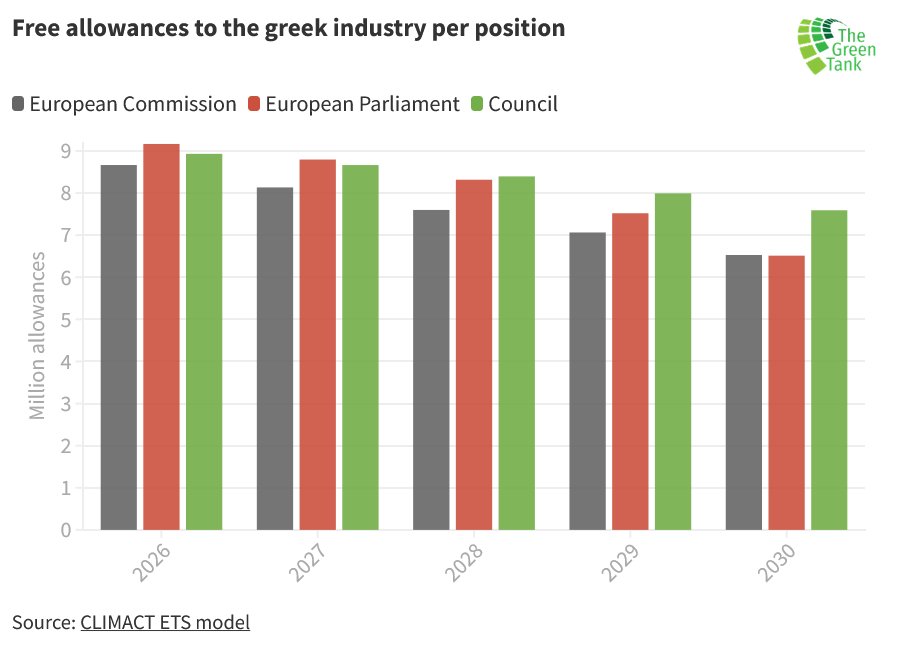 We are approaching the final, crucial stage of the trilogue negotiations for the revision of the Emissions Trading System Directive where European Commission, European Parliament and the Council will negotiate to reach a final compromise on the revised EU ETS Directive starting from their respective initial positions.

So, how is each of the three positions influencing Greece and what should Greece’s priorities be on the key points of the file?

The three different positions would lead to different outcomes for the EU as a whole and for Greece in particular in terms of overall emission reductions under the EU-ETS, the volume of the allowances distributed to Greece and the corresponding revenues (i.e. the Member State revenues, the Modernisation Fund and the Innovation Fund) and the speed of the phase-out of the allowances offered to the industrial sectors for free along with the phase-in of the new Carbon Border Adjustment Mechanism (CBAM).

In the following we use a model built by CLIMACT to comparatively evaluate the impact each of the three positions have on the abovementioned parameters for Greece.

Impact on the climate

Regarding the emissions reduction target for the sectors covered by the EU ETS, the European Commission (EC) and Council positions propose a 61% reduction in 2030 compared to 2005 levels, while the European Parliament (EP) proposes a 64% cut. This means that the volume of greenhouse gases allowed to be released in the atmosphere by all EU ETS sectors according to the EC and Council positions will be higher compared to those resulting from the EP proposal. The cumulative supply of emission allowances for the entire 4th ETS phase (2021 – 2030) for the position of each of the three institutions as estimated by the CLIMACT model can be seen in Graph 1. The EP’s position results in 341 million allowances or 341 million tonnes of CO2,eq less supply during the period 2021-2030 compared to the emissions corresponding to the positions of the EC and the Council.

Other than the increased emission reduction ambition of the EP position, another factor that contributes to the reduced supply of emission allowances of the EP position compared to the positions of the European Commission and the Council is the functioning of the Market Stability Reserve, the mechanism aimed to reduce the oversupply of allowances in the carbon market[1].

The EP supports the most ambitious review of the functioning of the MSR, supporting lower thresholds, leading to higher reduction of the emission allowances in the market.

Regarding the extension of the Modernisation Fund for which Greece is eligible, very small differences exist between the three positions in terms of the volume of allowances Greece will receive. Specifically, between 2024[2] and 2030 Greece will receive 19.9 million allowances if the EC’s original proposal is adopted, and 19.7 and 19.5 million, according to the EP’s and the Council’s position, respectively. The slightly smaller size of Greece’s share of the Modernisation Fund under the Council’s position is mainly attributed to the inclusion of Slovenia among the eligible Member States for the extension of Modernisation Fund. The marginal difference in Greece’s share between the EP’s and the EC’s position is attributed to the overall smaller supply of allowances to be auctioned under the EP’s proposal. Using a conservative estimate of 80 Euros/ tonne for the average carbon price during the 2024-2030 period, and also adding the 25 million allowances Greece is set to receive for the decarbonisation of its islands under the current EU ETS Directive,  the EU ETS will provide Greece with approximately 3.6 billion euros to modernise its energy sector. Graph 2 shows the sum of the member state auctioning volumes together with the Modernisation fund and the 25 million allowances for the decarbonization of the islands.

Despite the similarities between the three positions regarding Greece’s share of the Modernisation Fund, there is a fundamental difference on the type of investments that are eligible for funding. Specifically, the EC and the EP completely exclude investments on energy-related infrastructure using all fossil fuels. On the contrary, the Council’s position allows investments in fossil gas, thus directly undermining the overall climate goal of the EU, as well as the REPowerEU plan to tackle the energy price crisis, according to which, the EU’s fossil gas consumption, independent of the source, should be reduced by 64% by 2030 compared to 2020 levels, more than doubling the previous 30% reduction target included in the initial fit for 55 package.

Overall, the total number of allowances that will be distributed to Greece in the period 2021-2030 including those from the new Modernisation Fund and the 25 million allowances earmarked to decarbonize the islands is 216.4 million according to the EC’s original proposal; 216 million according to the Council’s preliminary position and 189.6 million according to the plenary vote of the European Parliament. It can be estimated that if the average carbon price resulting from the more ambitious position of the EP is more than 14.1% higher compared to the average price resulting from the more conservative positions of the EC and the Council, then Greece will end up with more funds from the EU ETS[3]. This percentage difference in the carbon price for which the revenue from the EP’s position will be higher than the one resulting from the positions of the EC and the Council, becomes even smaller than 14.1%, if the revenue from the Innovation Fund that will end up supporting Greek industries is taken into account, assuming of course the exact same number of allowances financing industrial decarbonisation in Greece under the three positions.

The Innovation Fund that is used to decarbonise the EU’s industries is not distributed to Member States by a fixed share; it is rather channelled to industries on a case-by-case basis, following a centrally managed evaluation process for each application submitted by the Member States. The overall size of the Innovation Fund varies significantly between the three proposals. Specifically, the Council proposes to channel only 669 million allowances to support the reduction of the EU’s industrial carbon footprint, whereas the EP’s and the EC’s proposals result to 901 and 899 million allowances, respectively, for the same purpose. In conjunction with the increased carbon prices that the EP’s position will probably lead to due to the higher climate ambition (-64% by 2030 vs -61%), the larger size of the Innovation Fund will likely result in a significantly higher revenue for decarbonization investments in the industrial sectors[4].

In addition to being the most ‘’generous’’ on the Innovation Fund, the EP proposed the establishment of a new fund, called the “Ocean Fund” which is similar to the Innovation Fund, but dedicated to the maritime sector. According to the EP’s position, 75% of the revenues from the allowances auctioned to shipping (i.e. revenues from 332 million allowances) will support projects that aim to decarbonize the maritime sector. Since the EC and Council do not have such a Fund, any projects to reduce the carbon footprint of the maritime sector will be financed through the Innovation Fund according to these two proposals. In this sense, the EP’s position lead to a much larger fund for the direct support of the decarbonization of all industrial sectors included in the ETS (1233 million allowances) compared to the 899 and 669 million proposed by the EC and the Council, respectively (see Graph 3)

There are also considerable differences in the number of free emission allowances distributed to Greece’s industrial sectors according to the different positions of the three institutions. As shown in Graph 4, the Council’s position would result to the highest volumes of free emissions allowances for the industry (92.5 million allowances for the period 2021-2030), followed by the corresponding volumes resulting from the EP’s position (91.2 million) and the EC’s position (88.9 million). Thus, the Council’s position undermines the most the efforts to decarbonize the industrial sectors, which has had only a minimal contribution to the emission cuts achieved in Greece by all EU ETS sectors during the first three EU ETS phases. On the other hand, even though the EP’s position has the earliest full phase-out date for free allowances offered to industries (2032), the phase out speed until 2030 is lower than that proposed by the EC, hence resulting to higher volumes of free allowances compared to the EC’s proposal. In that sense, if one focuses on the reduction in free emission allowances that will be achieved until the end of the 4th EU ETS phase (i.e. 2030), the initial proposal by the EC can be considered as the most ambitious among the three positions, despite the fact that the complete phase out of free emission allowances will occur 3 years earlier if the EP’s position is adopted.

Thus, taken together with the overall bigger size of the Innovation Fund, the EP’s position contributes much more substantially to the long-term competitiveness of the EU industry by phasing out the obsolete and unsuccessful so far free emission allowance system faster (2032 vs 2035) and by channeling more funds for industrial decarbonization.

Based on this analysis, we propose that Greece supports the following positions in the trilogue negotiations:

Higher climate ambition and a stronger MSR: Greece should support a higher ambition level than that of the Council’s and the EC’s preliminary positions of at least 64% emission reduction by 2030 compared to 2005 levels, as well as a stronger Market Stability Reserve (MSR) leading to a tighter control of the oversupply of allowances in the carbon market. In addition to being closer to the climate commitments the EU has undertaken by signing the Paris Agreement and the leadership role it aspires to play in global climate politics, such a position will be more aligned with the REPowerEU plan which aims at decreasing the dependence on fossil fuels -especially fossil gas- more rapidly. Furthermore, higher climate ambition and a stronger MSR, will most likely lead to increased carbon prices due to the reduced number of allowances in the market, which, will in turn, translate into bigger revenue for Greece from the auctioning of the allowances that it will receive during the rest of the 4th EU ETS phase, as well as from the Modernisation and Innovation Funds.

Faster phase out of free emission allowances to industry in conjunction with a larger Innovation Fund: Greece should support a faster reduction rate of the emission allowances that are offered for free in the industrial sectors until 2030 and a complete phase-out by 2032 at the latest. At the same time Greece should support a larger Innovation Fund for the decarbonization of its industry. This will contribute the most in the long term competitiveness of the Greek industry, and will reduce its carbon footprint which has remained almost stagnant over the years. Moreover, incentivizing the investments necessary to decarbonize the Greek industry and increasing the available funds for this purpose, will provide a realistic chance for Greece to achieve its ambitious 2030 national climate target set in the first National Climate Law (-55% in net GHG reductions by 2030 compared to 1990 levels).

Fossil fuel-free ETS-related funds: Funding fossil gas infrastructure through the Modernisation Fund or leaving the door open to do the same with the national revenue from the auctioning of ETS allowances, goes fundamentally against the very scope of the EU ETS, the overall climate targets the EU has committed to, as well as the objective of the REPowerEU plan to tackle the energy crisis. Therefore, Greece should support the full exclusion of all fossil fuels investments (including fossil gas) via the Modernisation Fund, as well as dedicating 100% of the revenue from the auctioned emission allowances to climate action in line with the proposal of the European Parliament, thus contributing to a faster and cheaper transition towards carbon neutrality.

[1] For more information on the oversupply of allowances and the MSR: https://thegreentank.gr/en/2022/06/14/eu-ets-guide-life-etx-en/

[2] Expected date when the revised Directive will come into force

[4] All the abovementioned emission allowance volumes of the Innovation Fund will be reduced, if the Council’s position from the 4th of October on the EU ETS resources that will be used to collect the additional 20 billion Euros needed for financing REPowerEU, is adopted. According to this position, the Innovation Fund volumes will be reduced by a number that corresponds to a revenue of 15 billion Euros (approximately 190 million allowances in current carbon prices).