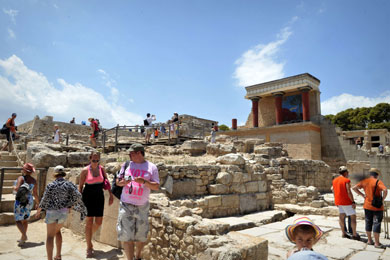 Tourism has contributed significantly to the Greek economy, according to INSETE report. It has become a true national champion in the race for a more extroverted Greek economy, given that more than 90% of its revenues come from abroad, within an extremely competitive global environment. According to the Labour Force Survey findings, at peak periods, tourism employs more than 10% of the country’s labour force and has become the 3rd largest employment sector (after commerce and the entire primary sector), ahead of manufacturing and the public sector. The apparent downturn in revenues for 2016, after 3 years of exponential increase (+41% between 2012 and 2015 in fixed prices), is due to the international trend associated with a decrease in the average per capita expenditure. It is also due to the fact that because of the prolonged uncertainty in the first half of 2016, the Greek tourism product was late in entering the international tourism market, leading to large last-minute offers to attract customers.The demand for international air travel to Greece remains quite high, while there is also a comeback of traditional markets, especially the Germanspeaking ones. Meanwhile, road tourism has recovered significantly over the last few months and a positive change is expected in arrivals for 2016.However, the extremely high taxes on the Greek tourism product, primarily an export product, are a significant inhibiting factor in this effort, excessively burdening competitiveness, business incentives and the disposable income of employees, while at the same time exacerbating seasonality.