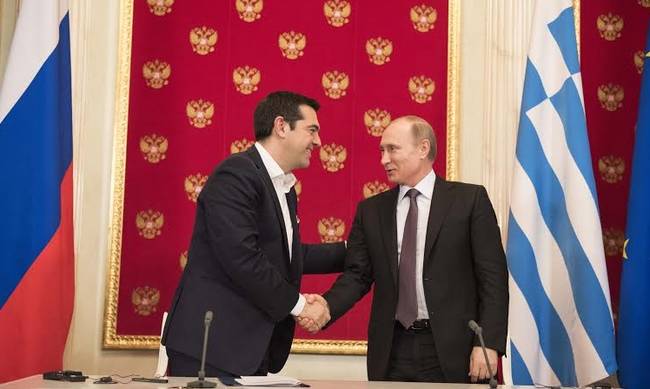 The top officials of the state’s energy apparatus have joined Prime Minister Alexis Tsipras and the Production Reconstruction, Environment and Energy Minister Panagiotis Lafazanis for an official visit to St Petersburg, during which the duo will meet with Russia’s President Vladimir Putin tomorrow and is expected to make official Greece’s interest in developing “Greek Stream”, the local segment of “Turkish Stream”, Russia’s latest natural gas pipeline proposal for supply to the EU via the south, from the Greek-Turkish border area.

The inclusion to the Greek delegation of the energy-sector company chiefs – main power utility PPC’s Manolis Panagiotakis; DEPA, the Public Gas Corporation’s Spyros Paleogiannis; and ELPE Hellenic Petroleum’s Grigoris Stergioulis – has obviously prompted curiosity over the purpose of their participation. It is believed they have joined the mission to develop ties leading to cooperation with members of the BRICS association of emerging economies – Brazil, Russia, India, China, and South Africa.

The Greek energy officials are expected to engage in talks with BRICS representatives on the sidelines of the St Petersburg International Economic Forum (SPIEF – 2015), to be held today.

As for the Greek government’s ambitious bilateral maneuverings with Russia, certain pundits have already limited their expectations of any meaningful and significant results. Such ties cannot be forged in minimal time for results of substance, and, most crucially, the European Commission has already expressed its disapproval of Greece’s effort to develop closer ties with Russia, the skeptical pundits contend.

Essentially speaking, the series of talks by Greek officials in St Petersburg, to culminate with that of tomorrow’s meeting between Tsipras and Putin, amount to no more than a game of diplomatic poker. The key message being conveyed is that Tsipras is in Russia to sign bilateral energy agreements of cooperation with the Russians at a time when Greece’s debt and bailout issues are the focus of attention in Brussels and Berlin.

Besides the Greek Stream pipeline project, it seems that the Greek government is also seeking to include various other issues as part of a wider energy agreement, such as LNG, crude oil supply, the expiring hydrocarbons tender for offshore blocks in the Ionian Sea and south of Crete, as well as the electricity market. The five-member BRICS association includes three petrol-producing countries, Brazil, Russia, and South Africa.

Russia’s Turkish Stream proposal seems to have already run into trouble. Turkey, the Former Yugoslav Republic of Macedonia (Fyrom), and Serbia, countries through which the pipeline would cross, appear doubtful, to add to the European Commission’s reserved stance, despite the fact that nobody doubts the pipeline would be a useful addition to EU energy supply.