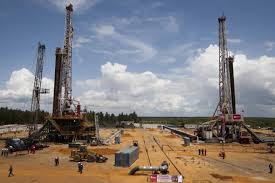 Three major oil companies whose presence, through prospective local interest, had bolstered the Greek oil market’s profile have withdrawn their interest in an exploration and exploitation tender for three onshore hydrocarbon blocks in western Greece, according to energypress sources.

The three companies, which had apparently prepared bids for a tender offering blocks in Arta-Preveza, Etoloakarnania, and northwest Peloponnese, are the British-Dutch giant Shell, France’s Total, and Spain’s Repsol.

The interest in the tender by the three companies had become apparent amid the local petroleum market as talks with banks, legal firms, and possible partners had taken place over recent months. The withdrawal by all three companies has been made clear as all this activity has now ceased.

Shell has already established interests in the wider area with production activity taking place in neighboring Albania, especially in the country’s south bordering with Greece. The oil giant had also eyed the three blocks in western Greece in the past.

Total, one of the world’s three largest oil companies, had purchased the entire package of seismic surveys conducted in the area by PGS, a clear indication of its solid interest in the Greek market. Total is already active in Cyprus, where it has been granted exploration and exploitation rights for an offshore block.

Repsol has placed particular emphasis on further growth and geographical expansion in recent times. Activity within the EU region serves its interests.

According to sources, all three companies took their first steps back once it became apparent that Greece was headed for snap elections as a result of the failure by political parties represented in Parliament to elect a new President.

According to sources, the tender’s procedures will continue despite the triple drop-out and the newly elected leftist Syriza-led government’s dislike of the tender’s terms set by its predecessors. ELPE (Hellenic Petroleum) and Italy’s Enel are considered certain to submit bids for the tender, whose submissions deadline expires on February 6. Participation by another Greek company, Energean Oil & Gas, is considered doubtful.

Even if the tender proceedings are continued, this alone does not ascertain completion, as, once the bidding stage is over, negotiations will precede the finalization of contracts.