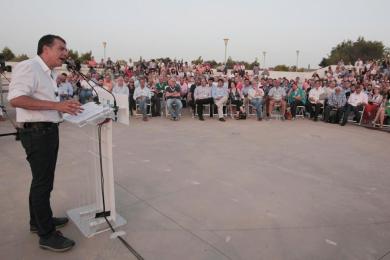 Journalist Stavros Theodorakis was confirmed as leader of To Potami on Sunday as the centrist party concluded its founding congress in Lavrio, southeast of Athens.

Theodorakis, who ran unopposed, will not be called party president as To Potami has decided to avoid such titles. The journalist founded the party earlier this year, leading it to 6.6 percent of the vote in the European Parliament elections on May 25. A ballot was not held on Sunday as nobody chose to challenge him for the leadership.

“To Potami has a big pool of supporters to draw from,” Theodorakis told party delegates, claiming that opinion polls show that a much larger proportion of the Greek public than 6.6 percent sees the party in a positive light.

Of 486 delegates, 86 were elected to the party’s national committee. These include the two MEPs To Potami elected in May.