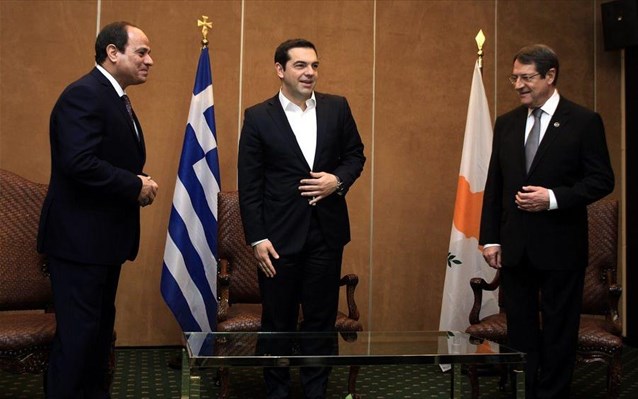 “The trilateral meeting of Greece-Cyprus-Egypt will send a message of peace, prosperity and stability in the region,” Prime Minister Alexis Tsipras said on Wednesday ahead of a meeting with Egyptian President Abdel Fattah el-Sisi and Cyprus President Nicos Anastasiades.

“With the seal of His Excellency the President of the Arab Republic of Egypt Mr. Sisi and the President of Cyprus Nicos Anastasiades, we inaugurate a new era in the relations between the three countries,” Tsipras said adding that “what they will co-sign today, will be important steps forward. We send a message of peace and stability in the region.”

President al-Sisi thanked the other two leaders for the third consecutive tripartite meeting which, as he said, reflects the deep relations of the three countries, contribute to the development of peoples and the cooperation and coordination on various issues of mutual interest. On his part, Anastasiades underlined: “This meeting provides an opportunity to send a message that this cooperation aims at peace and is not directed against anyone.”