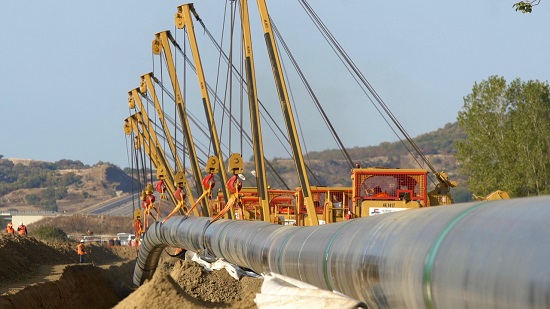 The Trans Adriatic Pipeline (TAP) is now more than 50% completed, nearly 16 months after construction began, including all engineering, procurement and construction scope, the TAP consortium has announced in a statement released today.

“TAP remains on its journey to deliver world-class health and safety performance across Greece, Albania and Italy. To date, our teams have collectively worked over 16 million manhours and driven approximately 43 million kilometres without a major incident,” the TAP consortium’s statement noted.

TAP’s contractors have cleared approximately 70% of the project route in Greece and Albania – 539km out of 765km – and over 45% of welded steel pipes are already in the ground (backfilled), the consortium informed.

Approximately 95% of the total 55,000 pipes to be used for the construction of the pipeline have been received in Greece, Albania and Italy, while the last shipment of offshore line pipes was offloaded in Brindisi, the Italian port, just days ago, between September 3 and 6, the TAP consortium added in the statement.

More than 5,500 people have been working for the project across TAP’s host countries – over 85% of which have been staff employed locally.

TAP has implemented a wide range of social and environmental investment (SEI) programs in the communities along its route. Substantial projects are due to be rolled out in the upcoming months. In total, TAP will invest over €55 million in SEI in Greece, Albania and Italy, the consortium noted.

TAP will transport natural gas from the giant Shah Deniz II field in Azerbaijan to Europe. The approximately 878 km long pipeline will connect with the Trans Anatolian Pipeline (TANAP) at the Turkish-Greek border at Kipoi, cross Greece and Albania and the Adriatic Sea, before coming ashore in southern Italy.

“We are pleased that TAP continues to progress on time and on budget. We therefore remain on track to deliver the first Shah Deniz II gas in 2020, bringing a much-needed new source of energy into the European energy network,” remarked Luca Schieppati, TAP’s Managing Director. “I want to underline that our project is built with the utmost care for the environment. Our teams are working very carefully along our route to ensure that the land on which construction has been completed is returned to the owners or users in its original condition or better. We are also collaborating with local authorities and local stakeholders to ensure that the benefits of our project are tangible across all those communities crossed by the pipeline,” Schieppati added.

TAP’s routing can facilitate gas supply to several southeast European countries, including Bulgaria, Albania, Bosnia and Herzegovina, Montenegro, Croatia and others. TAP’s landfall in Italy provides multiple opportunities for further transport of Caspian natural gas to some of the largest European markets such as Germany, France, the UK, Switzerland and Austria.