Last December, in alignment with the European Union (EU) legislation, Greece submitted a revised version of its 10-year National Plan for Energy and Climate (NEPC) to the EU Commission. The “fairly well-developed” document, as quoted in the summary of the Commission’s assessment, set out an ambitious roadmap for specific national energy and climate objectives to be met by 2030, committing the country to the bloc’s wider pledge to a clean energy transition.

Of the key targets outlined in the document, the reduction of greenhouse gas emissions was the main element of the NECP structure, with the Greek government targeting a reduction of more than 42% compared to 1990 levels. The lignite phase-out commitment was another key objective set in the plan, aiming at putting a complete end to the use of lignite in Greece by 2028. The increase of renewables’ share in the country’s total energy consumption to 35%, up from about 13% currently, was further included.

To work toward the achievement of those targets in this relatively ‘short’ timeframe, it seems imperative that Greece uses all its available tools. Natural gas, considered as by far the cleanest fossil fuel, can play its part in this transition process. The role of gas as a bridge to decarbonization has been advocated for a long time, especially that of fuel switching primarily from coal.

Natural gas penetrated the Greek energy market in 1986. The introduction of gas at that time was seen not only as a way of diversifying energy sources in the country, which would lead to reduced oil dependency, but it would more importantly give Greece the opportunity to establish itself in the European energy map. Moreover, gas would help the country to improve its environmental credentials in accordance with the EU regulations.

Despite the positive momentum during the first years of its inception, natural gas maintained a minor share in the Greek energy market, at about 0.2%, till 1996, with its use mainly limited to power generation. Gas started gaining some ground in the market over the following decade or so, especially after the commissioning of the first LNG terminal in Revythoussa in 2000, which was followed by some initial efforts for the liberalization of the market, but its consumption soon stalled as the country was entering into a decade-long economic crisis. As of today, one could argue that natural gas, with a market share of just 13% of total energy demand, never met those initial aspirations.

A number of recent developments, though, seem to have revived its growth prospects, facilitating its contribution to the country’s broader decarbonization efforts. After Greece’s emergence from the final bailout program in 2018, the investment climate has seen signs of improvement, with gas being among those feeling the benefits. The long-delayed privatization of the state-owned gas distribution network was finally materialized, with the stake majority being sold to a consortium of three major European natural gas transmission companies. A few months later, in January 2019, the European Investment Bank (EIB) agreed on the financing of the construction of a new LNG bunkering vessel in Greece, which is expected to be a first-of-its kind in the broader Eastern Mediterranean region, further pledging to the transformation of Greece into a regional hub. 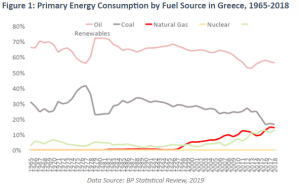 The latest domestic developments have coincided with a situation of global abundance and affordability, especially following the US shale revolution which brought in new supplies and added downward pressure to global gas prices. Also, the country’s geographical position to resource-rich areas makes it another determining factor for the fuel’s affordability in the country as transportation – either by pipeline or as LNG – takes a relatively high share of the delivered cost.

The country currently receives gas indirectly from Russia, with a capacity of 6.8 bcm per annum. In 2018, the expansion of Revythoussa LNG import terminal was also finalized, increasing capacity by 50% and adding another 8.3 bcm per annum to the market. Some 2 bcm per annum of Azeri gas delivered through the Trans-Antriantic Pipeline (TAP) have further been booked for Greece’s domestic market, expected to commence in mid-2021. Supplies of up to 2.6 bcm per annum could be further added through the Alexandroupolis Floating Storage Regasification Unit (FSRU) (Alexandroupolis LNG) based on the bidding offers following the completion of the binding phase of the market test in March 2019.

With potential supplies reaching up to 19 bcm per annum over the next few years, Greece would gain access to a sufficiently deep gas market, able to cover current gas demand by factor of more than 3. The projected depth of the Greek gas market, in turn, would increase price competition domestically, favoring the wider deployment of natural gas in the country. 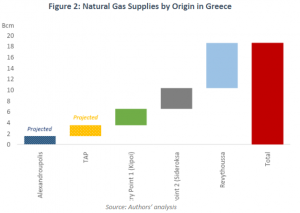 The bigger prospect of natural gas as a key fuel in the decarbonization is in fuel switching (lignite-to-gas), leaving significant prospects for CO2 emissions savings. Lignite, a domestically produced form of coal, has been the backbone of the country’s power generation for many decades now, as well as the main source of heat for industry and buildings.

According to the IEA, on average, coal-to-gas switching reduces emissions by 50% when producing electricity and by 33% when providing heat, which could be translated to total CO2 emissions savings of about 10% in today’s power and heat sectors in Greece. By switching from lignite to existing gas-fired plants, there is a potential to reduce around 4% of the country’s total CO2 emissions.

In 2019, lignite power plants supplied a fifth of the total power generation after recording a substantial drop of 4.5 TWh from 2018 levels on higher CO2 prices, in tandem with increasing generation from wind, decreasing continental gas prices and slightly higher net imports (Figure 3). However, about 10 TWh of lignite power generation are still to be eliminated by 2028, requiring alternative sources to step up their production to substitute it. Natural gas can be the fuel that can compensate for the lost lignite production with the existing gas-fired plants. Even in the extreme scenario where all lignite production is terminated in a single year, domestic gas supplies can still successfully cover the baseload demand. That would require about 25 TWh of gas-fired production, which would see gas-fired utilization rates of existing plants increasing to 60% till 2022 and 50% afterwards following the construction of the new 826MW Combined Cycle Gas Turbine (CCGT) station in the country. 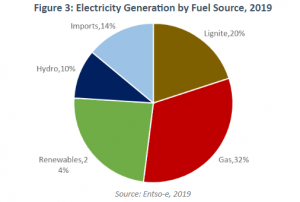 Gas can also contribute to less carbon in the heating segment, mainly in the residential sector where a further penetration of about 30% is estimated by the Regional Distributor System Operators (DSO) in areas connected to the main gas grid such as Thessaloniki, Attiki (wider Athens area) and Thessalia by 2025. Industrial gas demand seems to have reached a peak with a rather stable demand projected over the next decade or so.

With a global and domestic abundance of natural gas, a high price competitive market is expected, creating a favorable scenario needed for the wider natural gas development in Greece. A projected bullish trajectory of CO2 prices in Europe is further expected to facilitate the transition to gas as higher CO2 prices will add financial burden on lignite power plants.

Switching between fossil fuels, on its own, does not provide a long-term answer to climate change, especially considering the country’s privileged position in the potential growth of its renewable capacity. However, given the time it takes to build up new renewables and with the increasing penetration of renewables creating a greater volatility due to the lack of a stable and predictable production, natural gas represents a potential quick win for emissions reductions in the medium-term.

The Mytilineos corporate group Group has been awarded the Energy/Hydrocarbons Company of the Year prize, one of seven awards offered by the Greek Energy Forum, an exchange platform for energy sector professionals, at its annual GEF Energy Awards, held for a second time, at an event just staged at London’s prestigious Cass Business School.

Greek Energy Forum was founded in 2013 and its GEF Energy Awards established in 2016 as a biennial event to recognize and award organizations, enterprises and personalities inspiring others through exceptional work and valuable contributions to the energy and hydrocarbon sectors of the east Mediterranean.

The prizewinners of all categories were voted by an independent prize committee comprised of internationally renowned industry players not linked to the GEF.

The Greek Energy Forum (GEF), an international non-governmental organisation operating as a network for Greek energy professionals, has been inducted into the UN Economic Commission for Europe’s Workgroup of Natural Gas Experts, as an official member, GEF has announced in a statement.

The UN, as is widely known in the energy industry, consistently supports global initiatives for the promotion of sustainable energy and, within this context, has established a group of gas experts in order to support the achievement of the targets recently agreed to at COP 21, the Paris Global Summit on Climate Change.

The Greek Energy Forum’s addition to the group will allow the forum’s members to offer specialized and rich expertise with the aim of helping the UN workgroup determine the best policies that may boost the penetration of natural gas in the energy mix.

More specifically, the forum will join two United Nations Economic Commission for Europe (UNECE) taskforces. The first, Taskforce A, aims to determine the best policy practices on the role of natural gas in the increasing uptake of renewable energy in the ECE Region and also help achieve the objective of providing energy access to all ECE Region members. In addition, as a member of Taskforce B, the Greek Energy Forum will seek to offer Liquefied Natural Gas (LNG) guidance for optimal policies.

These taskforces are manned by representatives of national governments, national and intergovernmental regulatory bodies, non-governmental organisations, energy companies and academic institutions across the globe.

Just days ago, on April 21 and 22, the third session of the Group of Gas Experts in UNECE was held at the UN Headquarters in Geneva (Palais De Nations).

Greece and the Greek Energy Forum were represented by the GEF chairman, Alexandros Lagakos, who was also invited to attend as a guest speaker.

Lagakos presented an update on the progress and the ongoing steps towards the development of southeastern Europe into an efficient regional gas market. In particular, he analysed the impact of the ongoing and planned infrastructure projects (interconnections, storage) in the region, the progress of hydrocarbon exploration and extraction tenders, as well as the prospects of the addition of new sources into the Balkan region’s gas supply mix.