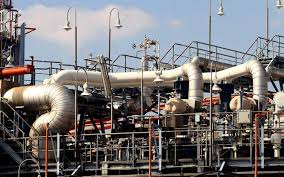 Azeri energy company Socar is examining the prospect of surrendering 17 percent of a planned 66 percent acquisition of DESFA to a European company in order to overcome European Commission concerns over the stalled deal, Production Reconstruction, Environment and Energy Minister Panayiotis Lafazanis has revealed. This would leave Socar with a 49 percent in DESFA, if the deal does proceed.

The minister’s disclosure of Socar’s latest thoughts on DESFA is based on an option that has been discussed at the European Commission over the past few months.

Socar had initially reacted negatively to the idea of settling for a 49 percent of DESFA instead of 66 percent, but now appears willing to consider the option.

Belgian company Fluxys is believed to be the most probable candidate for Socar’s possible surrender of a 17 percent stake of DESFA. Three more companies, from Spain, Germany, and Bulgaria, are also believed to be interested.

The European Commission recently stalled the sale of DESFA’s 66 percent equity share to Socar after suspending a competition-linked investigation into the agreement.

Just days ago, it was reported that Socar was behind the suspension as its interest in the deal had apparently waned. It was believed the Azeri company was buying time to seek a safe way out of the deal. Socar holds a 20 percent stake in the TAP (Trans Adriatic Pipeline) consortium developing the pipeline project to transmit Azeri gas to Europe via Greece.

ELPE (Hellenic Petroleum), which is selling its 35 percent stake in DESFA, believes a final European Commision decision on DESFA will be reached in the current year’s third quarter. The Greek State is selling the other 31 percent.

Lafazanis, who has openly opposed the sale of strategic utilities, is expected to offer his final opinion once the European Commission has decided. The DESFA deal had been reached by the country’s previous administration.